This political research note was prepared by JP Landman in his personal capacity. Landman is an independent political and economic analyst, and the opinions expressed in this article are his own and do not reflect the views of Nedbank Group.

This coming Saturday marks exactly 76 years since Winston Churchill made his ‘iron curtain’ speech. On 5 March 1946, visiting Fulton in Missouri as a guest of President Harry Truman, he famously said ‘… from Stettin in the Baltic to Trieste in the Adriatic, an iron curtain has descended across Europe.’

At the time, he was dismissed by some as a ‘war monger,’ but his observation was proven unambiguously correct. The iron curtain era came to an end in November 1989 with the fall of the Berlin Wall, which triggered consequences for the whole world, including South Africa, where it contributed substantially to the transition to democracy.

Now, 76 years later almost to the day, Putin’s invasion of Ukraine has brought down a new iron curtain across Europe. Airspaces are closed, sanctions enacted, nuclear forces placed on standby, weapons piled into Ukraine, nearly a million refugees already… the second iron curtain is here. It is sharply dividing Russia and countries in its influence sphere from members of the North Atlantic Treaty Organisation (NATO) and the European Union (EU) (the two blocs are not the same). It is very unlikely that this curtain will fall down any time soon.

The map below sketches the first iron curtain (the yellow line) as well as the new one (the red line). The red line stretches from the Black Sea across Europe to the Barents Sea. The map still shows Ukraine as aligned to the EU, but that is unlikely, given the invasion by Russia. 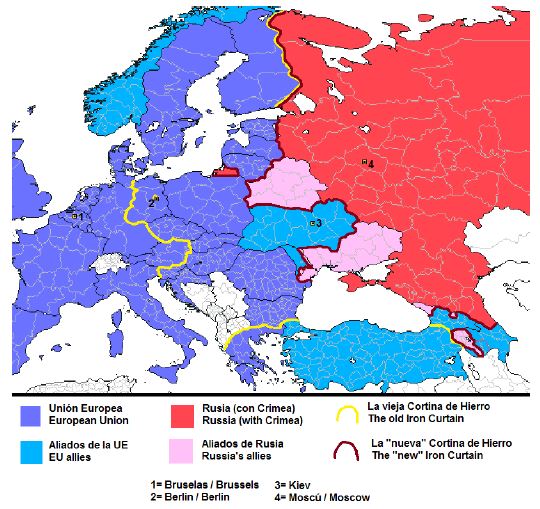 The second iron curtain is much further east than the first one. The two lines show clearly what Putin’s gripe is about: Mother Russia now rules over a much smaller roost. Bulgaria, Poland, Rumania, the Baltic States, and parts of old Yugoslavia used to be run by Russia but are now firmly in the EU or NATO. Whatever Putin’s delusions are, he is not going to recapture the territory by the old iron curtain. On the contrary, he has already strengthened the resolve of everybody to oppose him.

Finland has declared that it may join NATO because of the Ukraine invasion, jettisoning a long and very successful history of fierce independence from, but also neutrality towards Russia. It must be one of the most remarkable examples of a smaller country keeping a much larger, and growling, neighbour at bay. The Finns are now happy to move from neutrality to NATO. Even Switzerland drops its long-cherished neutrality and imposed sanctions against Russia.

Ukraine and Russia share a long and turbulent history. The Orange Revolution of 2004/05 saw the defeat of the pro-Russian candidate, Viktor Yanukovich. He in turn won the next election in 2010, only to be driven from power in the Maidan Revolution of 2013/14, which started after he refused to sign a closer cooperation agreement with the EU. He fled to Russia, which refused to recognise the new Ukrainian government.

After the Maidan Revolution, the new government abolished minority language rights, in effect Russian language rights. Within days, Putin invaded Crimea and two weeks later incorporated it into Russia. It was less than a month from the day Yanukuvich fled when Crimea was incorporated. Talk about taking a gap.

The following month, Russian-backed separatists in the eastern Ukraine region of Donbass where Russian speakers were concentrated. Separatists declared two ‘independent republics’ (Luhansk and Donetsk). A war of insurgency started, which is still ongoing. Roughly one-third of the Donbass is under Russian control (through insurgency forces) and two-thirds are still under Ukrainian control. Last week, Russia recognised the breakaway republics in a prelude to the full-scale invasion.

It is this eight-year-old conflict in the Donbass that the Russians now allege involves Nazi-like treatment of Russian-speaking Ukrainians and necessitates a ‘peace mission’ to ‘de-Nazify’ Ukraine.

The argument around NATO membership

After the collapse of the Soviet Union, NATO expansion east took place in two tranches. In 1999 Poland, the Czech Republic and Hungary joined NATO, and in 2004, the Baltic states, Romania, Bulgaria, and former Yugoslavian territories joined. Since the mid-90s, Russia has voiced vociferous opposition to the expansion of NATO. They couldn’t do much about the expansion in 1999 and 2004, but in 2008 matters came to a head. In April 2008, a NATO summit in Bucharest declared that Ukraine and Georgia would become members of the Alliance.

Putin argues that the inclusion of Ukraine in NATO would constitute a grave security threat to Russia and necessitates a response. In particular, it is alleged that NATO is planning to station nuclear weapons in the contested eastern provinces, right on the Russian border. Comparisons are made with the deployment of Russian missiles in Cuba in the 1960s and the severe US response.

However, Ukraine gave up all its nuclear weapons in 1994 (to Russia) and dismantled its last nuclear delivery vehicle in 2001. That was two decades ago. In 2010, Ukraine also signed a long-term lease with Russia allowing the latter to use the warm water port of Sevastopol in the Crimea. Nevertheless, Putin still annexed the Crimea, including Sevastopol, in 2014.

Given Russia’s overwhelming military power and Ukraine’s behaviour on nuclear weapons and Sevastopol, the present conflict, in my view, has nothing to do with a security threat to Russia. Instead, it is all about restoring the reach of the old Soviet Union, the collapse of which Putin described as ‘the biggest geopolitical disaster of the 20th century.’ He said that 16 years ago in 2005 already … talk about nursing a grudge.

After conflicting pronouncements, South Africa’s position was set out this week in meetings of the UN. It states inter alia that ‘South Africa is deeply concerned by the escalation of conflict in Ukraine’; that peace is best built through diplomacy and dialogue; that all nations must respect and uphold the principles of international law; that the UN Security Council and Secretary General should work towards a lasting solution; that ‘a diplomatic solution … should address the security concerns of the parties’; and that other conflicts in the world are not getting the same attention as the Ukraine conflict.

Although it does not spell it out, the last point probably refers to the treatment of Palestinians, with whom the ANC has long solidarity stretching back to the time of Chief Albert Luthuli, as well as several conflicts in Africa, Yemen, and Syria.

Given South Africa’s concern about the ‘escalating conflict’ and the need to adhere to ‘international law’ it is unclear why South Africa abstained from voting in a General Assembly motion that was approved by 141 to 5 votes with 35 abstentions. Not choosing sides for international law and de-escalation of violence? South Africa is falling behind the curve here.

It may be that President Ramaphosa sees an opportunity for an initiative to mediate a cease fire. Voting for the motion would have disqualified South Africa from such a role. By abstaining, South Africa may also help convince China to act as mediator (see below). I am speculating, and one must see how much of this actually happens.

This is day eight of the invasion and at this stage, there are really only two possible outcomes: either a ceasefire which brings an end to the killing and wilful destruction, or a long insurgency war. The Russians can take the cities but that will not be the end of the war. That is clear from the protracted conflict in the Donbass and the fierce resistance the Ukrainians are putting up. Russia may end up with another Afghanistan. It will also certainly increase the risk of a wider conflict between the West/NATO and Russia.

Ukraine has asked China to mediate in the conflict. It was a shrewd move by Ukrainian president Zelenskyy. China has so far maintained what one observer crisply called a ‘pro-Russia neutrality.’ The war cannot be in China’s long-term interest, it has considerable heft with Russia and can enhance its own standing by pursuing an end to the conflict. We will have to see whether China would decide to step up and play a mediating role.

The American hedge fund manager, Ray Dalio, is of the opinion that in the longer term, the conflict will fundamentally reshape the balance of power in the world between the US and an upcoming China. The war may just have the effect of reducing US power and enhancing China’s power.

Putin feels the biggest geo-political disaster of the 20th century was the break-up of the Soviet Union. Perhaps the biggest geo-political mistake of the 21st century was driving China away from the US towards Russia. Nixon and Kissinger’s strategy in going to China 50 years ago was precisely to use China to keep the Soviet Union off balance. Now China will probably use Russia to enhance its own position in the world.

This is a political research note and was prepared by JP Landman in his personal capacity. Landman is an independent political and economic analyst and the opinions expressed in this article are his own and do not reflect the views of the Nedbank Group.