The combined effect of the Budget, the re-opening of schools, the vaccine rollout and the prospect of summer holidays all signal a return to normal patterns of activity for the UK property market.

“Circumstances are conspiring to produce an active few months in the UK housing market,” said Tom Bill, head of UK residential research at Knight Frank. “While the stamp duty holiday extension, the re-opening of schools and vaccine rollout are driving supply and demand higher, the prospect of summer holidays will inject further urgency into the second quarter of the year.” 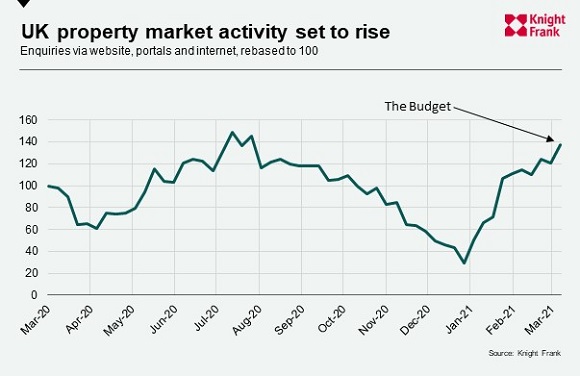 The Chancellor extended the stamp duty holiday to the end of June with a three-month taper in the Budget earlier this month. It will relieve pressure on the conveyancing system and may give some buyers and sellers pause for thought as the deadline is pushed back However, supply and demand are on the rise.

There was a spike in new supply in the week of the Budget, an analysis of OnTheMarket data shows. The number of new sales listings in England and Wales rose 18% week-on-week in the seven days to 6 March, the highest such rise since June 2020, a fortnight after the property market re-opened.

Supply had fallen in the first two months of the year as sellers were occupied with home-schooling and hesitated due to new Covid variants or the belief they would miss the March stamp duty deadline.

Meanwhile, demand was rising before the stamp duty extension was announced. The number of new prospective buyers in February was 8% higher than the same month last year. The start of 2020 was marked by particularly high levels of new demand following the general election in December 2019 and most of those registering last month would not have realistically expected to complete before the end of March.

While there are signs of a return to normality, what will be of longer-term importance for the economy and the strength of the housing market this year is a sense of finality in relation to the pandemic.

How was the UK property market performing before the Budget and will the stamp duty holiday extension change anything?

One immediate impact of the stamp duty holiday extension announced in last week’s Budget is that UK house price forecasts will need to be revised.

Indeed, it’s hard to think of a time when a succession of government interventions has had such a profound impact on the outlook for house prices in such a short space of time.

The extension will boost demand and prices at a time when the UK is moving closer to lifting lockdown measures thanks to a successful vaccine roll-out programme.

Our current forecast is for flat prices in 2021 across the UK, but the stamp duty holiday, as well as the extension of furlough scheme, means this will be revisited.

Even before the extension was announced, the property market was showing signs of strength, as the below chart shows.

This performance would have been boosted to some extent by the approaching March stamp duty deadline, but the momentum appears unlikely to dissipate. 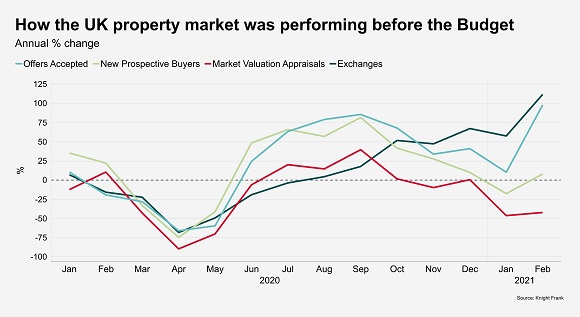 The number of exchanges in February more than doubled (+109%) compared to the same month last year as the high number of offers accepted in recent months came to fruition.

February was another strong month for offers accepted (+99% compared to February 2020), having experienced robust year-on-year growth since the market re-opened last May. This spike was partly attributable to the stamp duty deadline but exchange numbers are likely to remain strong in coming months as new supply and demand continue to rise.

The number of new prospective buyers in February was 8% higher than the same month last year. Most of those registering in February would not have realistically expected to complete before the end of March. The figure in January was 18% below the same month last year, which was a record month following the general election result in December 2019.

Meanwhile, on the supply side, the number of market valuation appraisals is starting to pick up.

During the first two months of the year, the figure was more than 40% lower than 2020, as we have previously analysed. Home schooling and question marks over new Covid variants caused sellers to hesitate.

However, there are signs this is changing as schools re-open from today and as Covid cases continue to fall. In the last week of February, the number of market appraisals was 57% higher than the first week of the year. The equivalent rise was 3% in the previous two years.

The initial stamp duty holiday deadline of 30 June will be more meaningful in some parts of the country than others.

The tax-free threshold of £250,000 that runs until 30 September means that in some lower-value property markets, the holiday has effectively been extended by six months.

Greater urgency will be felt in markets with higher average prices. The stamp duty on a £500,000 transaction will go from zero to £12,500 at the end of June before reverting back to its pre-holiday level of £15,000 in October.

More important for the property market will be a sense of finality, as we have discussed previously. Speculation that the holiday will be extended twice should fade as the vaccine programme progresses and the nascent economic recovery gathers pace.

Knight Frank Research provides strategic advice, consultancy services and forecasting to a wide range of clients worldwide including developers, investors, funding organisations, corporate institutions and the public sector. All our clients recognise the need for expert independent advice customised to their specific needs. Important Notice: © Knight Frank LLP 2020 This report is published for general information only and not to be relied upon in any way. Although high standards have been used in the preparation of the information, analysis, views and projections presented in this report, no responsibility or liability whatsoever can be accepted by Knight Frank LLP for any loss or damage resultant from any use of, reliance on or reference to the contents of this document. As a general report, this material does not necessarily represent the view of Knight Frank LLP in relation to particular properties or projects. Reproduction of this report in whole or in part is not allowed without prior written approval of Knight Frank LLP to the form and content within which it appears. Knight Frank LLP is a limited liability partnership registered in England with registered number OC305934. Our registered office is 55 Baker Street, London, W1U 8AN, where you may look at a list of members’ names.