London, UK- Demand for property has surged since UK markets re-opened in May

London, UK; 24 August – Demand for property has surged since UK markets re-opened in May, according to new research by global property consultancy Knight Frank. 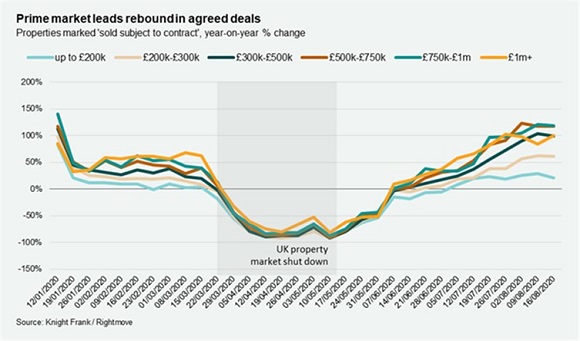 The strength and speed of the recovery may have come as a surprise to many, but evidence suggests it is continuing.

In the week ending the 16th August, analysis of sales subject to contract (SSTC) on Rightmove shows a 61% jump compared with the same week the previous year.

He added: “It is also likely that there are wider behavioural shifts in play, as people reassess their housing needs – the ‘escape to the country’ narrative is one that has been covered in detail.”

A closer look at the data suggests there are other nuances at play. The biggest increase in deals agreed since the end of lockdown, for example, has taken place in the prime market. A quicker recovery here tallies with a similar trend which took place during the period that followed the global financial crisis.

The numbers match Knight Frank data which shows a similar trend. In London, the number of offers accepted for that same week was 68% higher year-on-year and in the country the figure was 158% higher.

Knight continued: “A stronger recovery at the top-end reflects the fact that such buyers financial position means they tend to be able to transact more quickly, whilst more affluent households are also less reliant on lending.

“For now, pent-up demand, the stamp duty holiday and extension of the furlough scheme all continue to support a strong recovery in the market.”

The early signs are that the stamp duty holiday is working. Is there a case for it to be made permanent?

Millions of people have taken advantage of the government’s Eat Out to Help Out scheme since it launched a week ago.

Judging by property market activity since the government announced a stamp duty holiday last month, many have also decided that now is a good time to move home.

On a multi-million pound property, the saving will be a small percentage of the transaction price but it represents a meaningful discount for the vast majority of UK buyers.

For reasons discussed last week, the residential property market is, for now, as robust as it has been for many years.

However, an analysis of the market since the stamp duty holiday was announced on 8 July demonstrates that the measure has provided an additional boost to activity, as the below chart shows.

The number of offers accepted in UK markets between 8 July and 3 August was 146% above the five-year average for properties valued at less than £1.5 million, the section of the market where the impact of the holiday would be felt most. Above that figure, the increase was 71%.

Similarly, the number of new prospective buyers registering in the same period was 100% higher for sub-£1.5 million properties compared to a 70% increase above that value.

The number of viewings has also grown by more for sub £1.5 million properties, rising 46% versus the five-year average. Above £1.5 million, the increase was 13%.

The holiday, it must be concluded, is working. Whether it should become a permanent arrangement is something the government should consider.

More companies are announcing job cuts and any additional financial friction around the mobility of labour or people unfortunately made redundant could prove counter-productive.

We have explored before how this is not a good time for taxes that are economically self-defeating.

If more people are moving home, that is good for the economy well beyond the confines of the housing market. If they enjoy a meal in their new local restaurant once they have settled in, with or without the benefit of the Eat Out to Help Out scheme, they are demonstrating exactly why.

As buyers reassess where they live, new cycle journey time data for the capital may help inform the decision-making process

The impulse to escape to the country has been a well-documented feature of the Covid-19 pandemic.

As the new academic year approaches, many people will be assessing where they live even more closely.

However, it would be wrong to conclude that overall demand for London is waning. The number of new prospective buyers registering in the capital in the week ending 8 August was the sixth highest figure in more than 20 years.

Demand remains strong and while some are looking to leave, others are simply widening their search areas. For those who own two homes or are planning to buy a second home, some are striking a new balance between London and the country given the changes in how people work from home. A similar situation is evolving in suburban property markets in the US.

How long this trend lasts is more uncertain. We were assured in the period following 9/11 that it marked the end of tall tower, which, of course, it didn’t. People have been moving to cities for many centuries for good reasons, even though not all of them are apparent at the moment. For now, suburban markets are having their day in a way they didn’t after global financial crisis.

Another government initiative caused by Covid-19 has been to make the population healthier.

By combining this desire for fitness and more outdoor space, we have created a list of the least expensive areas from where you can cycle into central London, depending on how long you are prepared to spend in your saddle.

The results take average speeds and congestion into account and are based on arriving at various central London tube stations by 9am on a weekday.

The postcode areas of E16, E6 and SE28 contain the least expensive average property values for those travelling to Bank station in the financial district of the City, depending on the preferred commute time.

Meanwhile, for London Waterloo, SE10 is the best-value area for a cycle time of under 30 minutes.

For Paddington, SW9 is the cheapest area less than half an hour away, while NW10 and SM1 provide good value if you are prepared to cycle for longer. For a full list of the top-ten areas for these and other stations please click here.

It may provide a useful starting point for buyers who are re-thinking how and where they live.

Knight Frank Research provides strategic advice, consultancy services and forecasting to a wide range of clients worldwide including developers, investors, funding organisations, corporate institutions and the public sector. All our clients recognise the need for expert independent advice customised to their specific needs. © Knight Frank LLP 2020. Terms of use: This report is published for general information only and not to be relied upon in any way. All information is for personal use only and should not be used in any part for commercial third party use. By continuing to access the report, it is recognised that a licence is granted only to use the reports and all content therein in this way. Although high standards have been used in the preparation of the information, analysis, views and projections presented in this report, no responsibility or liability whatsoever can be accepted by Knight Frank LLP for any loss or damage resultant from any use of, reliance on or reference to the contents of this document. As a general report, this material does not necessarily represent the view of Knight Frank LLP in relation to particular properties or projects. The content is strictly copyright and reproduction of the whole or part of it in any form is prohibited without prior written approval from Knight Frank LLP. Knight Frank LLP is a limited liability partnership registered in England with registered numberOC305934. Our registered office is 55 Baker Street, London, W1U 8AN, where you may look at a list of members’ names.