London, UK – The Wealth Report 2020 launched by Knight Frank, reveals the results of its Prime International Residential Index (PIRI 100). The index, which tracks the movement of luxury residential prices in 100 cities and second home markets globally for the 12-months to the end of December 2019, reveals:

Kate Everett-Allen, head of international residential research at Knight Frank, said: “Despite wealth growth and interest rates in most advanced economies remaining at record lows, the slowing global economy, rising property taxes and, in some cases, a surplus of luxury homes for sale, weighed on price growth.

“The results of our Prime International Residential Index reflect this slowdown. While growth ranged from double-digit hikes in some markets to significant falls in others, we saw a shift in the trend of moderating growth that has prevailed since 2013. In 2019, the 100 locations covered by PIRI recorded average price rises of almost 2% - up from 1.3% in 2018, but still some way off the 2.8% recorded in 2013.”

Hong Kong prime price increases ended 2019 at 2.9%, with a mortgage cap reduction and three interest rate reductions mitigating some of the impact of the political volatility. Singapore (1.2%) is firmly back in the spotlight – the higher rates of stamp duty for overseas buyers are no longer considered draconian, rather a trade-off for stable politics and a secure currency in a city-state that applies no capital gains tax or estate duties.

Dubai’s hosting of Expo 2020, the first to be held in the GCC region, along with an overhaul of investment visas - as well as greater powers for Dubai’s Real Estate and Regulation Authority (RERA), which empowers it to oversee the strategy for all future real estate projects - are together adding some optimism to the market. The annual rate of decline slowed to -0.7% in 2019.

All price changes are in local currency.

Kate Everett-Allen, head of international residential research at Knight Frank, said: “Monaco continues to be the most expensive city in which to buy luxury residential property. US$1m buys just 16.4 square metres of accommodation here - the equivalent of a bedroom. This is followed by Hong Kong and London. New York slipped to fourth place in 2019 although the gap between London and New York is small with currency shifts also proving influential.”

The square metres of luxury property US$1m will buy around the world: 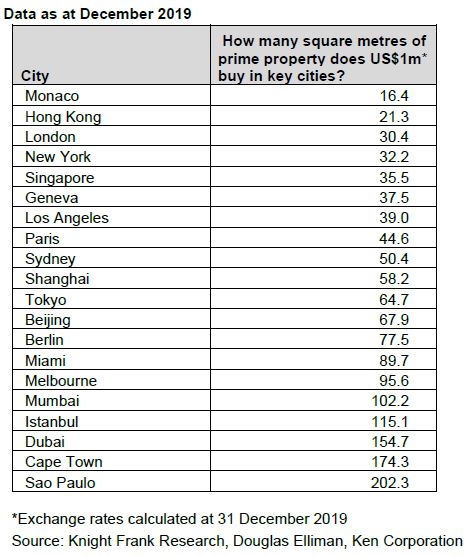 Knight Frank LLP is the leading independent global property consultancy. Headquartered in London, Knight Frank has more than 19,000 people operating from 512 offices across 60 territories. The Group advises clients ranging from individual owners and buyers to major developers, investors and corporate tenants. For further information about the Company, please visit knightfrank.com.