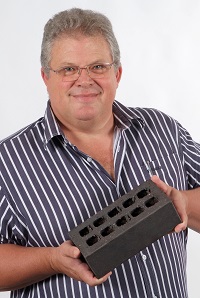 Dirk Meyer Corobrik CEO is pictured with the Black Brick which is proving popular.

Speaking after the high profile private and public sector gathering that hosted key stakeholders from both South Africa and abroad, Meyer said that design work for the new facility had already been completed and that negotiations were underway for the purchase of land to the north of Durban on which the new operation would be located.

This plant will augment production at Corobrik’s existing facility in Avoca.

Meyer said that the R200 million investment would bring Corobrik’s total national investment for the next two years to over R1 billion.

Once the R800 million new mega factory that is currently nearing completion at Driefontein in Gauteng was ready for production, construction of the new plant near Durban would begin. This would take about a year to complete with production likely by 2022.

Corobrik, which has its head office in Durban, currently operates 13 clay brick factories and 14 kilns countrywide. These produce a mix of plaster and face bricks for the residential and commercial markets. It also has two concrete operations in Durban which supply concrete paving and retaining walls. The company sells about four million bricks per working day.

Meyer said that the new Driefonein factory looked “extremely impressive” now that the exterior of the plant had been completed. The first kiln and drier would be commissioned early next year and construction of a second kiln and drier was well underway. The clay preparation machinery and extruders are also in place and installation of the cutting and wet packaging and dehacking machinery had also commenced, he said.

Driefontein is expected to be in full production by November 2020 with product in the market in early 2021.

Meyer said that the project, which had gone extremely smoothly and would be delivered within budget and on time, had been largely financed from the essentially debt free  company’s balance sheet.

1 000 jobs have been created during construction of the Driefontein facility with a further 60 permanent positions to be created as the factory comes on stream.  Similarly the KZN facility will create jobs.

Meyer said that 30 members of the local community had been trained and employed to lay bricks during construction, providing them with a marketable skill going forward. A similar approach will be taken in KZN.

"What is particularly important about these projects is that whilst we are using German intellectual property, most of the building will be done by South African companies.”

According to Meyer, Corobrik’s R1 billion spend would also ensure that the company remained relevant as a key stakeholder both within the construction industry and the broader South African business environment.

“This is undoubtedly a strategic investment that transcends any economic cycles. Most of our factories have a useful life of at least 40 years. If we do not invest, our business will not grow. Instead, we are investing at the right time to take advantage of future improvement in the economy.”

Meyer said that, as an investor, Corobrik had taken a long term rather than a short term view and had faith in government’s strategies to turn the economy around.

The company was set up in Durban in 1902 and has established itself as the country’s leading brick maker through ongoing investment in superior technology, manufacturing practices, distribution networks and logistic capabilities.

“We have been supplying bricks into the South African market for nearly 120 years and we’ve built an important legacy. Many of our country’s most iconic buildings have been constructed using Corobrik products and we must continue to provide the people of South Africa with quality affordable building products. As we say, ‘better starts here”. We believe that better begins with excellence and that both the Driefontein and Durban projects will help us to achieve a continued legacy of excellence,” Meyer said.

Corobrik (Pty) Ltd was established in Durban in 1902. Corobrik has grown to be the leading brick manufacturer, distributor and marketer of clay bricks, clay pavers and associated allied building products in South Africa. Corobrik achieved this by using expertise gained over more than 110 years in the brick business, superior technology, manufacturing practices, distribution network and logistic capabilities.

Corobrik currently operates 15 factories, which together with Corobrik's alliance partners, permits the company to offer to its valued customers a complete spectrum of brick and paver options.