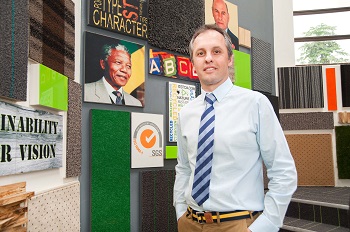 Dr Zarrebini, who heads up PFE International (which owns PFE Extrusion and Van Dyck Floors and has a large shareholding in Hammarsdale based waste tyre recycler, Mathe Group), has done extensive research into the applications of block chain technology as part of his MSc in Digital Currency from the University of Nicosia, Cyprus, one of very few international research institutions to establish a centre of excellence in this field.

He believes blockchain should not be limited to often controversial and much debated cryptocurrencies, but should be seen as a revolutionary tool when it comes to supply chains where they facilitate end to end traceability, optimum usage of resources, process automation and transparency.

Much of the nervousness surrounding blockchain hinges on a poor understanding of this highly complex new technology. Dr Zarrebini uses the analogy of a google spreadsheet that is duplicated thousands of times across a network of computers.

Imagine that this spreadsheet is regularly updated which means that everybody that is part of this network would validate or have a copy of any transaction that is on this distributed ledger,” he explains.

Speaking at a recent Green Building Council of South Africa Convention, Dr Zarrebini suggested that blockchain technology would be particularly valuable in the built environment, where existing building material could be repurposed in the future. It would enable future users and renovators to reliably track the provenance of building materials throughout their lifecycles even when the original suppliers were no longer available and to ensure adherence to existing environmental and building material standards.

Zarrebini said block chain facilitated autonomous payment systems such as one that is currently being used to facilitate peer to peer trading of energy. This allowed the monetization of roof space with those generating energy via solar panels able to trade this energy with neighbours using a shared ledger rather than via the national grid.

The related concept of tokenization is already being used to incentivise people to recycle. An example is Plastic Bank, an international initiative that aims to reduce the amount of ocean bound plastic waste.

“In developing countries such Bangladesh and Haiti, 80 percent of plastic waste comes from areas with high levels of poverty and no effective waste management systems. Many collectors have no bank accounts but have mobile phones that can support digital transactions. Plastic Bank has created a system of plastic exchange using blockchain technology.

“This incentivises individuals to collect plastic and bring it to processing areas. Rewards are passed on to them via a mobile wallet. These can be used to cover the educational or medical needs of families or even converted in to cryptocurrency or their local fiat currency.”

The use of tokenization has been effectively used in the UK’s RecycleToCoin system which delivers a token to an individual’s smart phone as the individual processes aluminium waste, plastic or glass bottles in a collection machine for recycling. Again, these can be traded for gift cards or cryptocurrencies or even donated to support the development of other recycling initiatives in poorer communities through Plastic Bank.

So there’s a very social aspect to it. The concept of the sharing economy is very prevalent. We are already seeing interesting concepts where the machine world is converging with that of the social world. I believe that they will operate in unison into the future,” he noted.

An example of where a blockchain system can benefit all parties is US-based non-profit, Goodr, which allows companies to donate surplus food to the needy and solves logistical challenges that prevent its distribution. This system not only records the collection and delivery of foodstuffs but can advise donor companies how much and which food is wasted the most, how much revenue is lost and what the potential environmental impact is.  It is also integrated with the internal revenue servic (IRS), allowing companies to receive tax credits for their donations.

Based on data from the European Tyre and Rubber Manufacturers Association, he noted that, globally, six billion new tyres are produced per annum and around 1 billion waste tyres generated.

“Digital tracking data allows for deeper analysis of supply chains. Using this technology, greater efficiencies can be gained and rogue activity marginalised. Such activity has been prevalent in the tyre recycling industry across the globe,” he said.

Dr Zarrebini believes that raw materials could be tokenized. “These digitalized materials would then become a non-fungible asset – a token which, through cryptography, could verify the ownership and authenticity of the asset. What would happen is that the raw material producer would generate the tokens, the logistics company would take the raw materials and the equivalent amount of tokens to tyre producers. They could then create a batch token that represented the weight of raw materials used to make a batch of tyres.

As the tyres are sold, a quick response code could be created and scanned to verify the authenticity of these tyres in the supply chain. So, these tokens could essentially represent the validation of the actual product itself.”

These tokens would also follow used tyres to recycling plants, allowing for full visibility and traceability along the entire supply chain.