Although still in positive figures, the Global House Price Index has seen a slowdown in annual growth for six consecutive quarters. From trade wars (US/China and Japan/South Korea) to Brexit, from political protests to weakening economic forecasts, headwinds are mounting and weighing on buyer sentiment despite a raft of interest rate cuts in the last three months.

China leads the index for the first time since 2010. At 10.9%, China’s growth represents the index’s lowest ranking top performer since Q1 2009. China’s leads due to Slovenia and Latvia, last quarter’s frontrunners, slowing at a faster rate.

Perhaps counterintuitively, this quarter also saw the highest percentage of countries and territories (93%) register either flat or positive price growth year-on-year since 2009.

In short, more locations are registering price rises year-on-year but their average rate of growth is slowing.

A look at the world’s largest advanced economies, the G7, which recently held its 45th summit in Biarritz, shows that all members apart from France saw their rate of growth slow in the last twelve months, but only Italy registered a decline in prices over this period.

Analysis by world region shows Latin America was the strongest-performing world region in the year to June 2019. Mexico, Chile and Colombia all registered annual price growth above 7%. Expanding economies, rising wages and greater access to credit is bolstering demand.

In Europe, slower growth is a common theme but some interesting trends stand out; Austria (7.3%) now outperforms Germany (5.0%), Portugal (7.8%) is rising up the rankings, and Central and Eastern European countries continue to perform strongly – The Czech Republic (9.4%), Hungary (9.2%) and Bulgaria (7.3%).

The UK has slipped from 36th place a year ago to 48th place in the global rankings as uncertainty surrounding Brexit mounts. However, it remains a highly localised market, with some cities including Birmingham, Plymouth and Cardiff outperforming the average and evidence of pent-up demand building at the prime end of the market.

Only four markets registered a decline in annual prices – Morocco, Italy, Finland and Australia. However, with two interest rate cuts this year, new lending stimulus in place and prices bottoming out, we expect Australia to rise up the rankings in the second half of 2019. 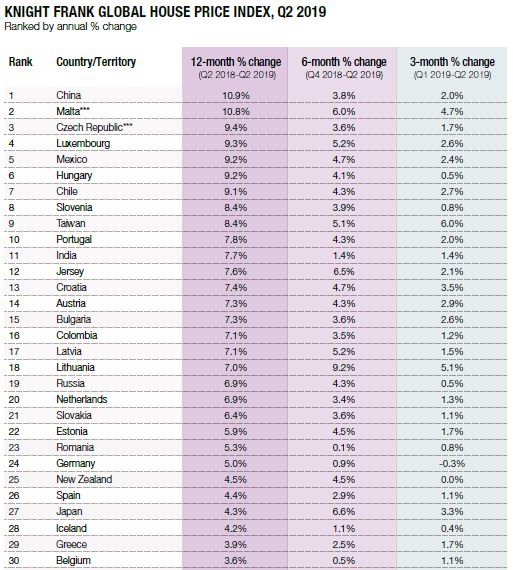 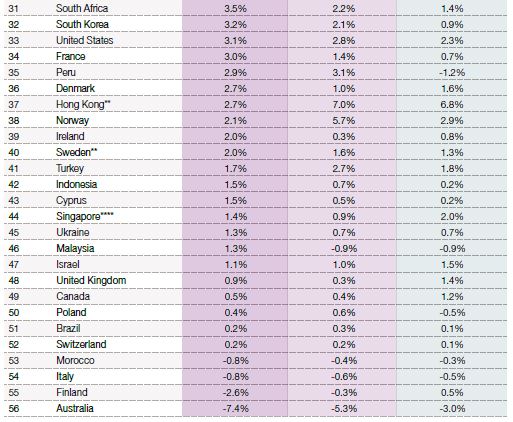 Important Notice © Knight Frank LLP 2019 – This report is published for general information only and not to be relied upon in any way. Although high standards have been used in the preparation of the information, analysis, views and projections presented in this report, no responsibility or liability whatsoever can be accepted by Knight Frank LLP for any loss or damage resultant from any use of, reliance on or reference to the contents of this document. As a general report, this material does not necessarily represent the view of Knight Frank LLP in relation to particular properties or projects. Reproduction of this report in whole or in part is not allowed without prior written approval of Knight Frank LLP to the form and content within which it appears. Knight Frank LLP is a limited liability partnership registered in England with registered number OC305934. Our registered office is 55 Baker Street, London, W1U 8AN, where you may look at a list of members’ names.