Durban, Saturday, 3 August 2019.  It was a night of twin celebrations as the South African Institute for Architects - KwaZulu-Natal Region (SAIA KZN) announced its 2019 Awards for Architecture and inducted its 2019/2020 president at a Corobrik-sponsored ceremony held on Friday, 2 August at the Hillside Campus. Taking the reins of the SAIA KZN will be renowned South African architect, Patrick Smith. 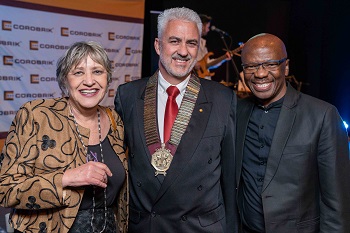 Originally from the farming community of Creighton in KZN, Patrick Smith switched over from his intended agricultural studies to pursue his passion for architecture in 1985. He went on to establish the Kloof-based practice, Walker Smith Architects, with a former UKZN colleague, Dean Walker, in 2002. He has worked on a number of residential and commercial projects including the interior design for the Moses Mabhida Stadium.

Addressing the members of the architecture community, civic dignitaries and other honoured guests at the inauguration, Smith said he regarded the presidency as a massive privilege and looked forward to the work ahead.

“The Institution has been around for well over a hundred years and, as such, carries a huge sense of tradition and accomplishment,” said Smith. “With this comes a heavy weight of responsibility that I do not take lightly. While a certain amount of politics is inevitable in a position like this, I do not regard myself as a politician, but rather as someone who is happy digging alongside colleagues in the trenches.”

Smith described SAIA KZN as a ‘voice for the architect’ within the province, given our national economic climate.  “We have seen the demise of several large construction firms in the last few years as the building industry has slumped. Lack of investor confidence has affected our profession directly and it is at times like this when institutions such as ours have to support our members.”

In a fitting tribute, this year’s keynote speaker was professor Ora Joubert, the former teacher of the newly-inducted KZNIA president. Joubert is also the recipient of numerous design awards and including eight Awards of Merit from the SAIA and its affiliate chapters, the Corobrik House of the Year Award, three Dulux Colour Awards and a landscape design award.

This year’s audience was kept enthralled by Joubert’s talk which covered extracts from her recently published book entitled ‘10+ years 100 projects – architecture in a democratic South Africa’. The book documents the most meritorious final-year thesis projects from all the universities offering architectural tuition in the country.

“These projects have never before been documented and the information is gradually being lost,” explained Joubert. “The book also includes a record of the current architectural discourse within our socio-economic and political circumstances, as well as some innovative architectural interpretations.”

SAIA KZN welcomed 15 entries for this year’s awards with adjudication performed by an esteemed panel comprising Nadia Tromp of Ntsika Architects; Rozena Maart, professor and immediate-past Director of the Centre for Critical Research on Race and Identity at UKZN; Dr Silvia Bodei from SAIA; as well as members from SAIA KZN, Mfundo Maphumulo, Somers Govender, and Patrick Smith. Sydney Baillon and Walter Peters were appointed as convenors. All the 2019 award-winners will go forward to the Corobrik SAIA Awards of Merit and Excellence hosted in 2020.

Musa Shangase, Corobrik’s Commercial Director, congratulated both Smith on his appointment as well as the award winners at this year’s event: “Corobrik is proud to, once again, be supporting such a momentous occasion - one that places a spotlight on the incredible architectural talent of this province. The evening was made even more special by the induction of Patrick Smith as SAIA KZN president. His illustrious career and industry foresight will, no doubt, see the organisation continue to grow through innovative ideas and community collaboration.”