The Prime Global Cities Index, which tracks the movement in luxury residential prices across 46 cities, increased by 1.4% in the year to June 2019, up marginally from 1.3% in March 2019 but still significantly lower than its four-year average of 3.8%.

Although Berlin leads the index, its rate of annual growth has slowed from 14.1% in March 2019 to 12.7% in June 2019. Frankfurt, by comparison, has seen its annual price growth increase from 9.6% to 12.0% over the same period. However, with prime prices in Berlin and Frankfurt currently around €11,500 per sqm and €13,500 per sq m respectively they remain competitive by European standards.

Madrid and Paris are following similar paths recording 5.2% and 5.0% annual growth respectively. In both cases, the headline figure conceals variations at a neighbourhood level.

In Madrid, areas such as Chamberí as well as outer non-prime districts are performing strongly. In Paris, the Left Bank, in particular the 6th and 7th arrondissements, are now pausing for breath having witnessed upward of 11% price growth since 2017, whilst the 18th continues its upward trajectory.

In mainland China, tier 1 cities such as Beijing (4.5%) and Guangzhou (2.7%) saw prime price growth strengthen in the first half of 2019 as optimism grew surrounding the potential relaxation of housing policies, even though authorities reiterated their stance against speculation.

In Hong Kong (0%), the opening of various cross-border infrastructure projects, which should boost economic links in the Pearl River Delta over time, failed to counteract immediate concerns over the US/China trade war and political discord.

Singapore’s prime market (0.9%) remains subdued as buyers adjust to the latest round of regulations, yet despite this, a number of record sales prices have been achieved so far in 2019.

Sluggish economic growth explains the wave of interest rate cuts evident in the last three months (Figure 1) as policymakers try to stimulate growth. Much hinges on the next three months with stronger headwinds on the horizon we expect the index to moderate further in the second half of 2019 before strengthening in 2020. 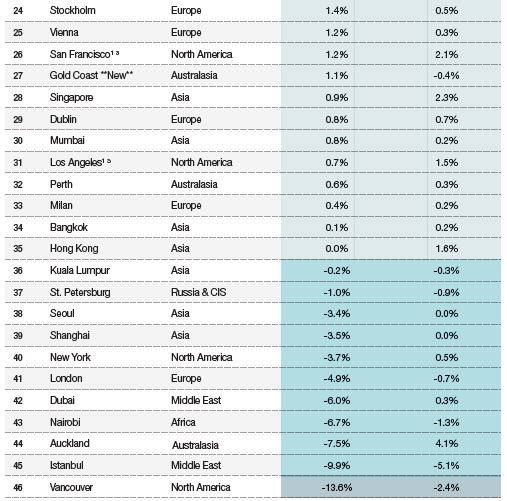 Knight Frank’s Prime Global Cities Index tracks the movement in prime residential prices across 46 cities worldwide using data from our global research network. Compiled quarterly, this is a valuation-based index tracking the top 5% of the housing market in most cities.