The great moderation continues. Two years ago, prime prices were rising at an average rate of 4.3% per annum; growth has now slowed to 1.3%.

KNIGHT FRANK’S PRIME GLOBAL CITIES INDEX TRACKS THE MOVEMENT IN PRIME RESIDENTIAL PRICES ACROSS 45 CITIES WORLDWIDE USING DATA FROM OUR GLOBAL RESEARCH NETWORK. COMPILED QUARTERLY, THIS IS A VALUATIONBASED INDEX TRACKING THE TOP 5% OF THE HOUSING MARKET IN MOST CITIES. 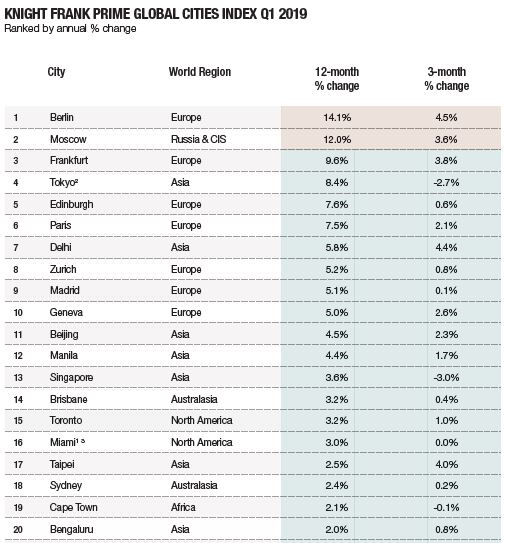 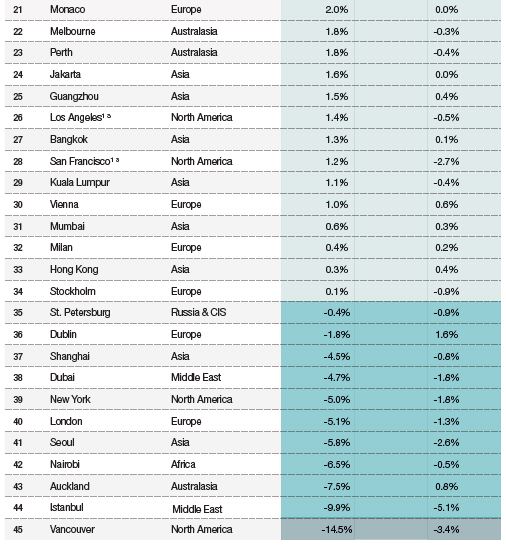 The Prime Global Cities Index, which tracks the movement in luxury residential prices across 45 cities globally, registered its lowest rate of annual growth since the final quarter of 2009, when the world was in the grip of the financial crisis.

What’s changed? Although still rising, the rate of wealth creation globally slowed in 2018. The last six months saw political and economic headwinds intensify. In the first quarter of 2019, the threat of a global trade war loomed, uncertainty surrounding Brexit peaked and the IMF projected that 70% of the world’s economies would see a slowdown in growth in 2019.

Add to this, the rising cost of finance – the US alone has seen nine rate rises since December 2015 influencing not just the US but also the 13+ currencies pegged to the US dollar - and a moderation in prime sales and hence prices was expected.

However, there are exceptions to the rule. As we predicted in our Prime Forecast 2019, key European cities continue to outperform with seven of the top 10 rankings this quarter occupied by European markets. Berlin (14%), Frankfurt (10%), Edinburgh (8%) and Paris (8%) are out in front. All four cities share three key attributes; strong tenant demand, limited new supply and relative affordability.

Moscow (12%) has also risen up the rankings. Prime districts such as Ostozhenka in the Russian capital saw a number of high-end projects launch in 2018 pushing prime prices higher.

In Canada, the gap between Toronto (3%) and Vancouver’s performance (-15%) continues to widen with almost 18% percentage points now separating the two cities. Whilst both operate a foreign buyer tax, Vancouver has seen a flurry of additional measures aimed at reducing speculation and curbing price inflation.

Miami leads the four US cities tracked by our index, its appeal boosted by the State and Local Tax (SALT) deduction ruling, which has sparked a rise in the number of US tax migrants heading to Florida given the absence of income tax and inheritance tax as well as favourable corporate tax rates.

Notes: Data for New York relates to Manhattan; Data for Los Angeles, Miami, and San Francisco is to February 2019. Data for Monaco is to December 2018. The price change for Tokyo relates to all properties above JPY100m. The methodology for Berlin and Frankfurt changed in Q4 2018 to reflect achieved prices, prior to this data was based on asking prices only.

If you’re thinking of buying or selling, or would just like some property advice, please do get in touch.