A growing number of buyers are readying themselves for life beyond Brexit, as Tom Bill explains

Demand has continued to build in the prime London sales market while politicians in the UK attempt to resolve their differences on Brexit.

Despite the fluid and fast-moving political backdrop, there remains the potential for some form of relief rally once more clarity emerges surrounding the UK’s future relationship with the EU.

There is clear evidence that a number of buyers have manoeuvred themselves into a position that enables them to act once the current impasse has been broken, something that could happen at short notice.

The number of new prospective buyers registering in prime central and prime outer London increased by 11.3% in the year to March 2019 compared to the previous 12-month period. Meanwhile, the number of offers made rose by 14.3% over the same period.

So not only are there more new buyers compared to a year ago, but those buyers are each making more offers, increasing pressure on the demand side.

While demand has grown, the supply of new properties has not kept pace. Vendors have acted in a more cautious manner against the backdrop of Brexit and the number of new listings declined 12.5% in the year to March across prime London markets.

As a result of these diverging trends, the ratio of new buyers to new listings in prime central and prime outer London rose to 9.1 in March, the highest figure Knight Frank has ever recorded.

We discuss the possible Brexit outcomes in more detail on page 6, but given this level of pent-up demand we would expect a material rise in trading volumes should the current political deadlock be broken.

Any political resolution would lead to an initial period when demand outstrips supply, which may also provide upwards pressure on pricing.

Following this initial period, new property listings are likely to rise, which would lead to greater equilibrium between supply and demand.

Any impact on pricing is therefore likely to be short-lived. In the longer-term, a more prolonged period of political or economic stability should see house price inflation return in prime London markets.

Declining supply in the lettings market has been more acutely felt in lower price brackets, as Tom Bill explains

Average rental values in prime central London continued to rise on an annual basis in early 2019 as a result of declining levels of supply.

The increase was 1.1% in the year to March while in prime outer London average rents were flat following two years of declines.

Tax changes for landlords have prompted some to leave the rental sector. The latest proposed change could lead to the end of so-called ‘Section 21’ notices, which has created uncertainty over how some tenancies will be legally brought to an end. Meanwhile, the number of buy-to-let mortgages issued in the UK is about 40% lower than it was before an additional 3% stamp duty surcharge was introduced in April 2016.

However, while the number of new lettings listings in PCL declined 6.3% in the year to March, it was the most modest decline in over 18 months.

This is due to a growing number of landlords who have re-listed their properties on the lettings market after attempting a sale.

Political uncertainty has curbed activity and pricing in the sales market, which means some vendors have not been able to achieve their asking price.

An analysis of lettings supply shows that supply reductions been more marked in lower price brackets, which suggests there is a greater financial imperative to sell for landlords of comparatively lower value properties.

While total available listings across London declined 14.3% in the year to March, there was a 3.5% increase for properties rented for more than £1,000 per week. Above £3,000 per week there was a 15% increase, Rightmove data shows (see figure 3 below).

This discrepancy in supply levels between price bands explains why rental value growth was stronger in lower price brackets in the year to March. Rental values between £250 and £500 per week grew 4.3% in PCL whereas there was a 0.7% decline between £1,500 and £2,000.

Overall, tenant demand remains strong. The number of new prospective tenants per listing was 5.6 in March, the highest figure since January 2018, which is likely to keep upwards pressure on rental values across all price brackets. 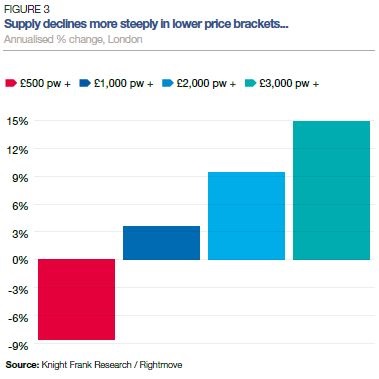 MACROVIEW THE RISK OF A DISORDERLY BREXIT

On the one hand, prolonged political uncertainty may curb activity across UK residential property markets.

On the other, the length of the latest extension may diminish the threat of a disorderly exit from the EU, which has always been the primary risk for property markets.

The EU initially considered a longer delay and if buyers and sellers believe an established pattern is forming for further extensions, there may be a stronger inclination to trade. The pound largely shrugged off the news of the latest extension.

The extra time is designed to enable Theresa May to forge an agreement with Leader of the Opposition, Jeremy Corbyn that will be ratified by the House of Commons. However, it may prove too “soft” for some in her party given it may involve membership of some form of Customs Union, something that would prohibit an independent trade policy. Meanwhile, the emerging fault line on the Labour side is whether to subject any deal to a confirmatory second referendum.

If they cannot agree a deal, Parliament will choose between a range of options, the result of which Theresa May has said she would abide by. Her original deal remains one of these possible outcomes.

This will all take place against the backdrop of other moving parts, including the stability of Theresa May’s position as Prime Minister as well as the potential for emerging divisions on the EU side following the European elections in May.

However, despite the political uncertainty, the economic news remains largely positive.

The latest GDP figures for the UK, which showed 0.3% growth in the three months to February, were better than expected, while wage growth and employment levels remain healthy.

Elsewhere, the global economic backdrop has become more benign since the US Federal Reserve reversed course towards a more dove-ish interest rate policy in January. Other central banks have followed suit, which is likely to reduce the probability of a near-term global recession. It will also keep the return on cash and bonds lower and enhance the appeal of real estate. For the UK, it also means less immediate pressure for an interest rate rise, even once Brexit is resolved.

PLEASE GET IN TOUCH

If you are looking to buy, sell or would just like some property advice, we would love to hear from you.

If you are a landlord or a tenant and would like some help or information, we would love to hear from you

© Knight Frank LLP 2019 – This report is published for general information only and not to be relied upon in any way. Although high standards have been used in the preparation of the information, analysis, views and projections presented in this report, no responsibility or liability whatsoever can be accepted by Knight Frank LLP for any loss or damage resultant from any use of, reliance on or reference to the contents of this document. As a general report, this material does not necessarily represent the view of Knight Frank LLP in relation to particular properties or projects. Reproduction of this report in whole or in part is not allowed without prior written approval of Knight Frank LLP to the form and content within which it appears. Knight Frank LLP is a limited liability partnership registered in England with registered number OC305934. Our registered office is 55 Baker Street, London, W1U 8AN, where you may look at a list of members’ names.