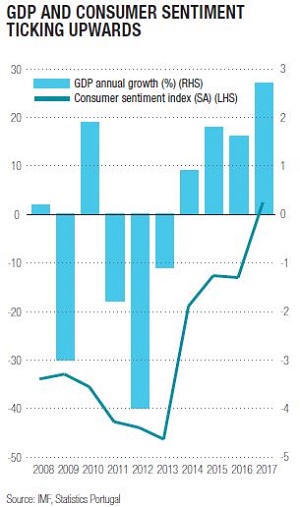 HOW DOES THE HOUSING MARKET DIFFER COMPARED WITH A YEAR AGO?

The housing markets of Lisbon and the Algarve are markedly different from one another but both have seen an uptick in sales volumes, price growth and market liquidity over the last year.

Luxury prices on the Algarve increased 6.5% in 2017 year-on-year and mainstream prices in Lisbon stand 24% above their low in 2012.

The Algarve’s Golden Triangle extending from Quinta do Lago to Vale do Lobo and Almancil remains the Algarve’s most exclusive second home destination. Villas below €5m have registered strong sales rates whilst at the western end of the coast, the area between Portimão and Sagres, villas below the €1.2m threshold are facing strong demand.

WHAT IS PORTUGAL’S APPEAL?

Unlike a number of countries, the Portuguese Government has not tightened rules on foreign ownership or increased property taxes. Instead, the absence of inheritance tax along with two key initiatives have been critical in attracting new investment.

Firstly, the Non-Habitual Residence (NHR) tax rule, introduced in 2009, allows for a flat rate of 20% personal income tax from activities performed in Portugal and a tax exemption, including pensions, on all foreign income.

The second measure, ‘The Golden Visa’, arguably of greater relevance to the Lisbon market, offers residency to investors outside the EU (enabling free movement across the Schengen area, comprised of 26 EU states) in return for a minimum property investment of €500,000. Operational since 2012, the scheme has attracted over 6,300 applicants and has proved particularly popular with Chinese, Russian and South African buyers (figure 2).

In addition to these two initiatives, Lisbon has one of the highest qualities of life (ranked 38th out of 450 cities in Mercer’s latest benchmark index) due to low crime, good transport links, international schools and healthcare.

WHAT IS BEHIND PORTUGAL’S ECONOMIC TURNAROUND?

Portugal was hit hard by the global financial crisis and ensuing Eurozone debt crisis. The government implemented wide-ranging structural reforms and employment has picked up significantly, helping to spur on its economic recovery and radically altering the government’s fiscal position. Annual GDP growth has shifted from -3.0% in 2009 to 2.7% in 2017 (figure 1).

The economic crisis served as a catalyst to creativity and entrepreneurship, as a result Lisbon has cemented its reputation as a key hub for technology and start-ups. Business sentiment is also strengthening with Siemens, Bosch, Peugeot and BNP Paribas all expanding their footprint in the country.

WHAT EVIDENCE IS THERE TO SUGGEST THE COUNTRY IS ATTRACTING MORE FOREIGN BUYERS?

Since 2000, Portugal’s foreign-born resident population has doubled from 207,000 to 416,000 according to figures from the Portuguese Government.

Tourism is frequently a lead indicator of international housing demand and Portugal witnessed almost a 12% increase in foreign tourist arrivals in 2017. The country hosted 12.7 million tourists in total with the UK, Spain, Germany, France and Brazil accounting for 57% of inbound arrivals.

A decade ago, 60% of buyers on the Algarve originated from the UK and Ireland but this has changed significantly with Northern Europeans (from Scandinavia, Germany and the Benelux nations) now active and the UK market share declining. The most notable trend has been a surge in French enquiries in the last two years, a trend we have seen in Spain as well.

Lisbon saw very few investment-driven purchases until 2012 when rent reforms opened up the market by rebalancing the rights and responsibilities of tenants and landlords. The result has been a significant resurgence in interest from developers and investors.