Our Prime Global Cities Index climbed 2.6% in the year to June 2018, its weakest annual rate of growth since the final quarter of 2012.

The decline in the overall index’s performance is not due to a rising number of cities registering an annual decline. Instead, the weaker growth is due to the top performing cities rising more slowly. Last quarter seven cities registered double-digit annual price growth, this quarter only three – Guangzhou (11.9%), Singapore (11.5%) and Madrid (10.3%).

The gap between the strongest and weakest performing city has shrunk from 33 to 20 percentage points in the last quarter.

The introduction of new, and the strengthening of existing, property market regulations, along with the rising cost of finance and a degree of political uncertainty is resulting in more moderate price growth at the luxury end of the world’s top residential markets.

Guangzhou leads the rankings with Beijing (7.3%) and Shanghai (3.3%) in 10th and 22nd place respectively. The recent decision by Chinese authorities to scale back a major housing subsidy programme is expected to dent sales volumes in second and third tier cities but prime prices in first tier cities are expected to see steady growth in the coming year.

Singapore (11.5%) has accelerated up the annual rankings and now sits in second place. High land bids by developers has translated into higher new-build values. In an attempt to curb price inflation, the authorities announced further increases to the Additional Buyer Stamp Duty (ABSD) in July, this includes higher rates for foreign buyers (20%) and for developers (30%) as well as tighter lending rules.

Hong Kong has also introduced a new cooling measure – a new vacancy tax. Under the new rules, developers will incur a penalty, 200% of the annual rental value, if new apartments are left unsold and empty for six months or more.

In the US, San Francisco (9.5%) and Los Angeles (7.8%) are the frontrunners. The US economy is firing on all cylinders and housing demand has been boosted by a buoyant labour market.

Cape Town and Dublin stand out as two prime markets where luxury price growth has softened in the last six months but for very different reasons.

The rate of annual growth in Cape Town has halved in the last six months from 19.9% to 8.2%. The citywide drought and the uncertainty over the process of land expropriation without compensation has weakened sales activity. However, six weeks of solid rainfall and new land guidance from the Government has mitigated this concern and sales volumes are strengthening again.

By contrast in Dublin (0%), tighter lending rules, rising luxury supply and a reduction in sterling-denominated buyers is leading to more moderate price appreciation. 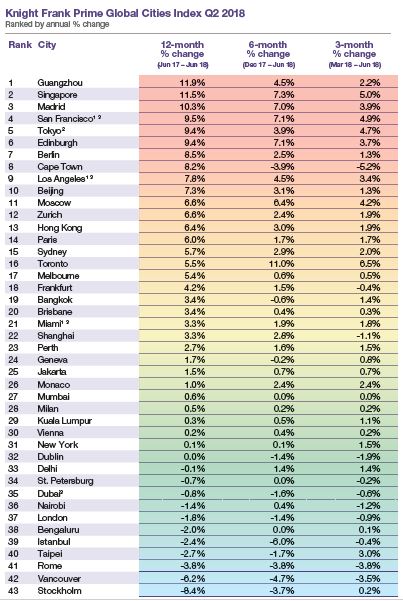 Notes: Data for New York relates to Manhattan; Data for Frankfurt is to Q1 2018. Data for New York is to May 2018 and data for Los Angeles, Miami, and San Francisco is to April 2018. The data for Berlin relates to those properties in the 95th quintile which are located in the central area of Berlin. ¹ Based on top-tier of mainstream market in metro area. ² Based on all contracts above Yen100m. 3 Provisional.