HONG KONG BACK ON TOP OF PRICE RANKINGS

Hong Kong leads our Global House Price Index rankings for the first time since the second quarter of 2015 with average prices ending the 12 months to March, 14.9% higher. Since our index was first published in 2008, Hong Kong has held the top spot on ten different occasions – more than any other territory tracked. 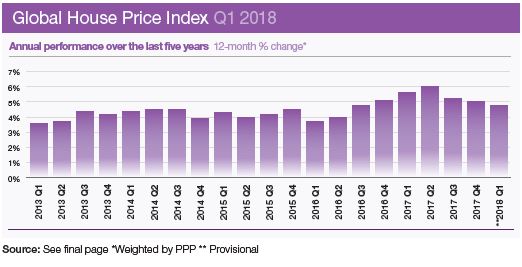 Despite an improving supply scenario over the long-term – 96,000 apartments are due to be released in the next three to four years – and the likelihood of a prime rate rise, prices in Hong Kong continue to accelerate with small to medium-sized units recording the strongest price growth.

Supply constraints alongside strengthening demand are together putting pressure on prices in both Malta and Jersey.

In Ireland’s case, its burgeoning economy explains its strong performance. Ireland has been Europe’s fastest-growing economy for four consecutive years, with GDP growth estimated to have reached 7.8% in 2017. Despite rising by 12.7% in the year to March, residential prices in Ireland remain 21% below their peak in Q1 2007.

As we indicated in our last edition, Europe’s recovery is now well-underway, closer analysis confirms 11 of the 15 strongest-performing housing markets globally were in Europe at the end of March 2018.

What is clear is the extent to which the outliers are disappearing with the performance of countries and territories now converging. A year ago 18% of markets recorded annual price growth above 10%, in Q1 2018 this figure has fallen to 9% (figure 3). This may be an indication that buyer sentiment is weakening, as the shift towards tighter monetary policy and the removal of stimulus becomes a reality in key global economies.

Ahead of the G7 summit, we assess average price change for each member state and the rise in base points since the last G7 summit a year ago (figure 4). Canada and the US, the two markets that have registered the strongest rise in prices, have also seen their base rate rise by 0.75 basis points over this time. 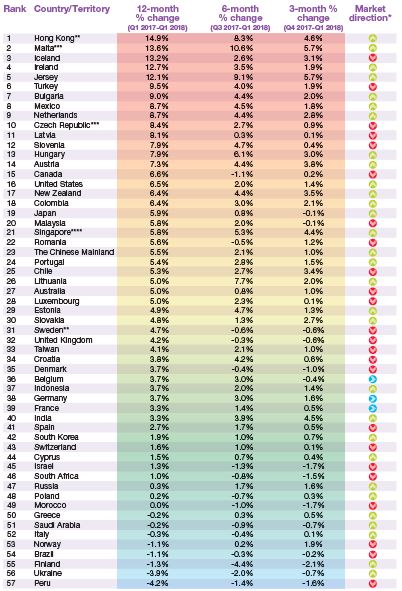 © Knight Frank LLP 2018 – This report is published for general information only and not to be relied upon in any way. Although high standards have been used in the preparation of the information, analysis, views and projections presented in this report, no responsibility or liability whatsoever can be accepted by Knight Frank LLP for any loss or damage resultant from any use of, reliance on or reference to the contents of this document. As a general report, this material does not necessarily represent the view of Knight Frank LLP in relation to particular properties or projects. Reproduction of this report in whole or in part is not allowed without prior written approval of Knight Frank LLP to the form and content within which it appears. Knight Frank LLP is a limited liability partnership registered in England with registered number OC305934. Our registered office is 55 Baker Street, London, W1U 8AN, where you may look at a list of members' names