SA Finance - Bridge City gets a boost from Budget Speech 2018

Durban, 22 February 2018: In his Budget Speech 2018, Finance Minister Malusi Gigaba used Bridge City as an example of a successful public-private partnership which is leading to social and economic transformation. 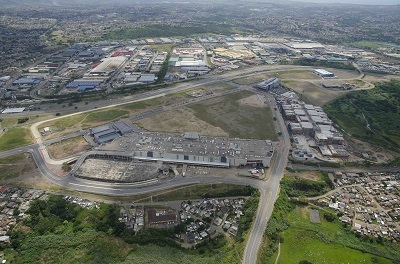 Aerial shot of the Bridge City precinct, north of Durban

Gigaba noted: “On a visit to the Bridge City hub in eThekwini, I saw first-hand the transformative potential of coordinated public investment in reviving township economies through public and economic infrastructure investments and catalysing private sector investments.”

“We partner with varying levels of government to realise transformation and growth,” says Tongaat Hulett Development MD, Mike Deighton, who is responsible for the company’s land conversion and development. “We have a unique portfolio with a well-established development platform, ensuring that property is developed in such a way as to present the best economic opportunities for South Africa and for the KwaZulu-Natal community.”

Bridge City north of Durban, a joint venture between eThekwini Municipality and Tongaat Hulett is a mixed-use urban precinct linking adjacent areas to each other and the wider metropolitan region. Founded on the existing rail service (with a rail station located under the Bridge City shopping centre) and the Bus Rapid Transport (BRT) routes currently being built between Bridge City and surrounding centres, the development has attracted increasing interest as a decentralised residential and commercial town centre hub with an adjoining industrial business estate.

“We have invested in this development together with the city because we have a deep understanding of the challenging socio-economic profile of our region. We are actively seeking development partners and investors who share this vision and are able to deliver products that meet the goal of a truly integrated mixed use development that represents the vision of a new urban future for South Africa,” says Deighton.