Durban, 21 November 2017.  Durban may contribute 14% of South Africa’s Gross Domestic Product (GDP) but it doesn’t have 14% of the big property players active in the market. To attract these companies, it is important to deliver the message that now is a time of great investment opportunities.

As the financial hub of our country, Johannesburg tends to be fiercely competitive, operating with a distinctive pace and intensity.

Still in the throes of relocating his family to Durban, du Toit will commute to and from Johannesburg, using this as an inspiration to attract more potential investors to the East Coast.

He sees his new role as positioning Tongaat Hulett Developments, in particular, and Durban, in general, within the broader national property market in order to attract big property investors.

“Even though there are Johannesburg based consultants and bankers who know what is happening here, the general market still remains uninformed,” he points out.

Michael Deighton, managing director of Tongaat Hulett Developments, said that du Toit’s appointment, which was effective from 01 November 2017, marked an important milestone in the organisation’s renewal journey and would play an important role in attracting larger strategic investors to the region.

“We are very excited to have Chris on board and are looking forward to his valuable contribution towards the achievement of our strategic and operational goals and objectives.

Tongaat Hulett Developments is continuing its journey of organizational renewal to enhance the capacity of our team to create value for all stakeholders,” he said.

Du Toit holds a B. Compt, Hons degree, CA(SA) and Securities & Investment Institute certificate in Corporate Finance.  He has over 16 years’ experience as a corporate finance professional gained across Europe, Africa and North America and is a strong relationship builder which supports his ability to originate and execute deals.

Prior to joining Tongaat Hulett Developments, he was Vice President (Corporate Finance) at Erin Energy. He also worked in investment banking at Macquarie Capital.

Du Toit says that prior experience has taught him the importance of building a strong platform in the market place.

“With recent acquisitions by national players, we have seen the start of a new season that will continue into the future The sheer scale and nature of upcoming projects lend themselves to international and national players in this market.  This makes them ideal for marketing to larger national players and organisations, he believes.

He says that, going forward, Tongaat Hulett Developments will package parts of its portfolio as a pipeline. “This phased approach is good for big developers who look for serious scale.”

“In the past, we have embarked on high end residential, commercial or industrial developments. With a longer term portfolio approach, the focus will now be more on mixed use developments with a number of large projects coming up,” he explains.

Existing projects such as Cornubia – which will be a landmark investment because of its location, access and infrastructure – and Sibaya are good foundations. New portfolio developments which are lined up will keep the ball rolling.

Du Toit remains upbeat about the prospects despite the challenging economy. “We have been through one of the toughest economic years this country has faced in a long time. With GDP growth sitting where it is, it is a difficult operating environment for all businesses.   However, you attract different investors in these times and you develop suitable projects.  This is where a portfolio approach is valuable,” he says.

He points to Sandton, Johannesburg, to prove that investment in South Africa continues. “There is still a lot of investment in this country. It is selective. People are much more hesitant. Potential buyers make sure that economics stack up and they do their due diligence correctly. What we want to see over the next 24 to 36 months, when the economic climate stabilises and foreign investment returns, is a pick up in the pace of development / investment. I think that, next year, things will improve.  The rest of the world is growing at 3 to 4 % so we should be up there as well.”

Du Toit notes that Tongaat Hulett Developments has a team of talented people to take land conversion through to development. “We need to be astute as to how we monetise and develop the portfolio.”

He is looking forward to being part of this team and to contribute towards the evolving landscape “Despite the economy being a challenge, we have the ability to roll out development and respond to the economic climate.  It is definitely not just business as usual.

A parallel challenge will be relocating and settling his young family along the Coast. Although this might be an upheaval, he is confident that his wife Monique who is an HR executive for an engineering consulting company and son Ewan (9) and daughter, Isabella (6) will enjoy the quality of life that the East Coast offers.

The family returned to South Africa nine years ago after a stint in Europe and settled in Johannesburg. With family in Durban and having lived in both Johannesburg and Cape Town, du Toit is now looking forward to putting down roots in Durban.

As a keen sportsman, he is also looking forward to the mild climate and outdoor lifestyle. He races mountain bikes, has a private pilot’s licence and enjoys flying. He was also involved in the development of junior cricket in Johannesburg where he had his own private academy – something he could well bring with him to Durban! 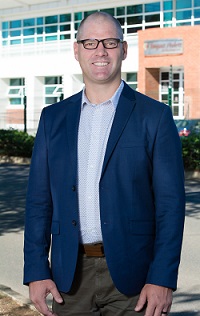