The slowdown in China’s cities has influenced the index’s overall performance this quarter, but some Indian cities are rising up the rankings says Kate Everett-Allen.

The index increased by 6.1% in the year to June 2017, down from 6.9% last quarter. This marks the index’s first decline since the start of 2016. The number of cities registering annual price growth above 20% has fallen from 12 to nine in the last three months, with Chinese cities less dominant at the top of the rankings.

Last quarter, seven of the top ten rankings equated to Chinese cities, three months on, only three Chinese cities remain; Wuxi, Zhengzhou and Changsha. However, this is a deceleration rather than a crash. Prices are still rising on a year-on-year basis in all twenty of the Chinese cities we track within the index. The outliers have reduced in number and the lower tier cities are now outpacing cities such as Shanghai and Beijing, which have seen the most stringent cooling measures.

Toronto leads the rankings this quarter with prices ending the year to June 29% higher. Following the introduction of a new tax on foreign buyers in April of this year, Toronto may follow Vancouver’s path and see price growth moderate in the coming months. Our index covers the period to June 2017 but the latest data from the Bank of Canada shows Toronto registered a decline in prices in August – the first since January 2016

Long-term frontrunners such as Hong Kong, Reykjavik, Wellington and Budapest are holding firm but this quarter we have seen some new contenders rise up the rankings, most notably some key Indian cities.

A year ago, the ten Indian cities tracked by our index averaged 3% annual price growth, today this figure has jumped to 12%.

Analysis of key economic and political groupings, from the G8 to BRICs and MINTs, highlights the extent to which house price growth is accelerating fastest in cities located within emerging markets. Cities in the BRIC nations averaged 7.5% annual growth to June 2017 compared with cities in the European Union, which averaged 4.7% over the same period.

The number of cities registering declining house prices year-on-year remains static at 27 but European cities are increasingly well-represented at the bottom of the table, particularly those in the southern European economies such as Greece, Cyprus and Italy.

Analysis by world region highlights Asia’s outperformance with prices rising by 10.9% on average across the region. At the other end of the rankings, Africa stands out as the only world region to see average urban house prices decline year-on-year. 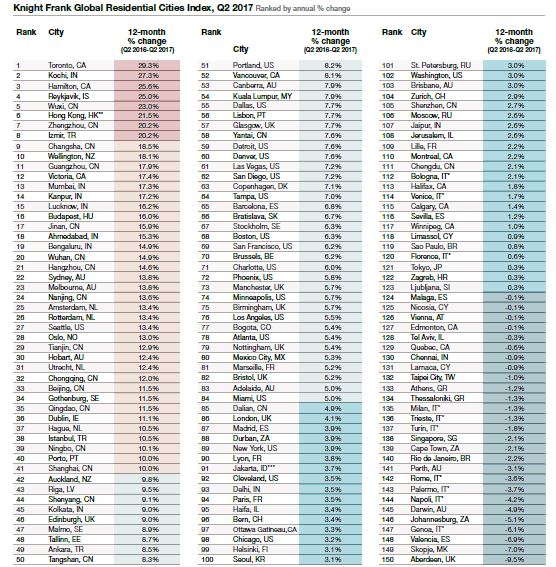