The South African Reserve Bank’s Monetary Policy Committee (MPC) lowered the key monetary policy interest rate – the repo rate – by another 50 basis points to 5,5%. On the back of this latest cut in the repo rate, Absa announced that its lending rates to the public, i.e. prime and variable mortgage rates, will decline by the same magnitude to a level of 9%, effective from 19 November 2010.

The further cut in interest rates came on the back of recent developments in respect of the domestic economy. Year-on-year growth in manufacturing production tapered off to only 1,4% in September; employment remained under pressure up to the third quarter of the year; and the Reserve Bank’s leading business cycle indicator moved largely sideways in the past few months up to August, suggesting that the performance of the economy could remain around current levels towards the end of the year and into early 2011.

Consumers continue to experience some financial pressure in the wake of still high levels of debt in relation to disposable income, job losses and relatively tight credit conditions. Growth in credit extension to the household sector improved during the course of the year after bottoming in late 2009, but is still well below the 10% level on an annual basis. Consumer confidence was largely unchanged in 2010, while business confidence came under further pressure in October.

Consumer price inflation, at 3,2% year-on-year in September, is at its lowest level since December 2005. This was to some extent the result of continued rand strength on the back of a weak US dollar, while food price inflation remains benign. The CPI inflation rate is forecast to remain low in the rest of the year and is expected to rise only gradually during 2011.

The direction of interest rates in 2011 will to a large extent depend on economic developments and consequent movements in key economic indicators, such as consumer price inflation, during the course of the year. 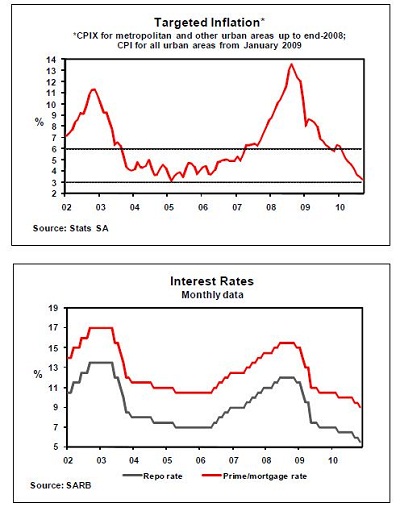