Year-on-year (y/y) price growth in the value of middle-segment homes for which Absa approved mortgage finance (see explanatory notes), slowed down significantly in recent months up to September this year. The average nominal value of small, medium and large houses increased by a weighted 2,9% y/y in September, after a revised growth rate of 5,4% y/y was recorded in August. On a month-on-month basis the average nominal value of a home in the middle segment of the market is declining since May this year, bringing the average price to R1 012 200 in September – down by R42 700, or a cumulative 4%, after peaking at R1 054 900 in April.

The current downward trend in year-on-year house price growth can to some extent be ascribed to base effects, as a marked recovery in price growth occurred in the second half of last year. However, month-on-month declines evident in average house prices over the past few months are probably related to developments on the economic front (lower real GDP growth in the second quarter of 2010; tight employment conditions in the first six months of the year; trends in consumer finances (lower second-quarter real income and consumption growth, while the ratio of debt to disposable income remained high); interest rates dropping by only 100 basis points so far this year; and consumer confidence remaining flat in the first three quarters of the year). 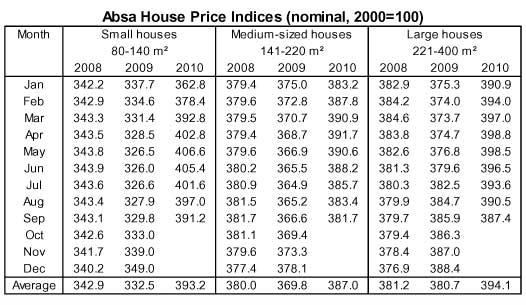 In respect of large houses (221m²-400m²) the average nominal value increased by only 0,4% y/y in September (1,5% y/y recorded in August after revision). The value of a large house came to a level of around R1 411 200 in nominal terms in September. In real terms the average value of a home in the large segment was down by 1,9% y/y in August, after declining by 0,8% y/y in July this year.

In the first nine months of 2010 the average nominal value of middle-segment homes increased by an average of 9,1% y/y, with real price growth averaging 4,9% y/y in the period January to August. Real price growth recorded over this period is based on an average headline consumer price inflation rate of 4,7% y/y in the first eight months of the year.

Based on the abovementioned house price trends up to the third quarter of the year, nominal year-on-year price growth of about 7% is expected for the full year. Real house price growth for 2010 will be dependent on nominal price trends as well as average consumer price inflation for the twelve month period. 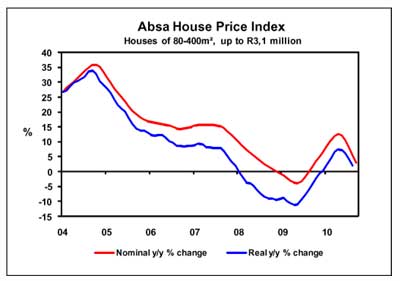 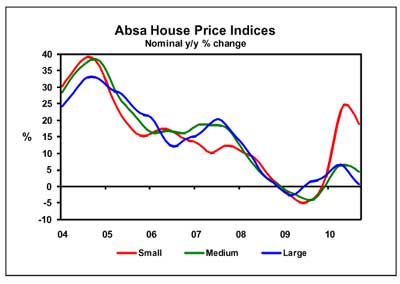 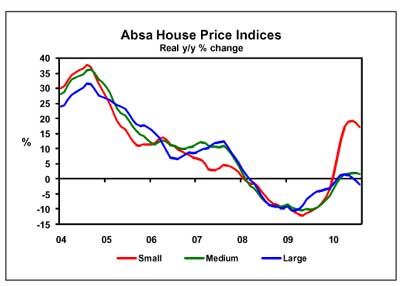