The South African Reserve Bank’s Monetary Policy Committee (MPC) lowered the key monetary policy interest rate – the repo rate – by 50 basis points to 6%. As a result, Absa announced that its lending rates to the public, i.e. prime and variable mortgage rates, will be cut by the same magnitude to 9,5%, effective from 10 September 2010. After interest rates have been cut by a cumulative 600 basis points since December 2008, the mortgage rate will be at its lowest level since mid-1974, whereas the prime rate will be at a 30-year low.

Consumer price inflation slowed down to below market expectations, coming in at 3,7% year-on-year (y/y) in July this year, from 4,2% y/y in June. The July figure is the lowest on record since April 2006. Administered price inflation, which was in double digits over the past few months, tapered off to 8,6% y/y in July (10,8% y/y in June), contributing to the further slowdown in the headline inflation figure. With consumer price inflation believed to have reached a lower turning point, interest rates are not expected to be lowered further this year.

Based on the latest cut in interest rates, mortgage repayments will now be about 31% lower compared with late 2008, when the mortgage rate was at a level of 15,5%. The cumulative 600 basis points worth of interest rate cuts since December 2008 have caused the cost of servicing household debt, including mortgage debt, to drop significantly. However, many households are still struggling with a high debt burden, with the ratio of household debt to disposable income above the level of 78%. The forecast is for the debt ratio to remain around this level towards the end of the year and into 2011.

According to Absa’s calculations, house price growth slowed down to a nominal 7,1% y/y in August 2010 on the back of the base effect of a strong recovery in price growth in the second half of last year. House price growth is expected to taper off further towards the end of the year, and to remain in single digits in 2011. The lower interest rates, however, will support the property market, but are not seen as a major stimulating factor.

After bottoming in late 2009, year-on-year growth in household mortgage advances remained relatively low in the first seven months of this year (see table below), reflecting conditions with regard to household finances, the extent of consumer confidence, and the effect of the National Credit Act. Household mortgage advances will be supported by the low interest rates, but are forecast to continue to record single-digit year-on-year growth in the rest of 2010. 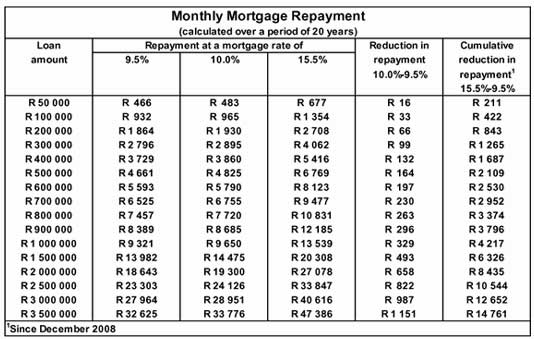 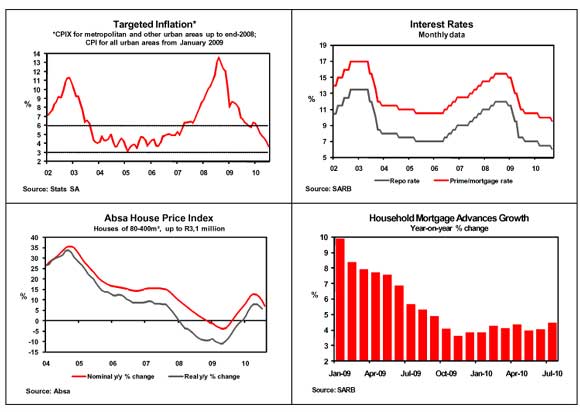