·     The price of greenfield and brownfield residential development land rose by 6.1% and 3.7% in the second quarter of 2010

·     This most recent price growth means that prices for both greenfield and brownfield land have risen by 20% over the 12 months to June this year.

·     Demand from applications for land purchases has risen by 10% over the second quarter, outpacing supply which rose in volume by only 3% over the same period

“Despite there being some upturn in the land market there remains a disconnect between bidders and funders, with the latter maintaining a cautious approach towards any investment in land which is perceived as carrying risk. Accordingly, despite the equity markets’ desire to see the quoted companies secure their future land banks, activity has remained relatively slow with deals generally being concluded on terms which reflect real value or significant cash-flow deferral.

“We believe the land market will become increasingly parochial and as a consequence its performance will be erratic. There will certainly be locations within London and the south east where we can look forward optimistically, however, the overall trend will remain one of nervousness with companies continuing to keep a close eye on the performance of the resale market. In particular, we believe the northern cities are in for a difficult time as the reductions in government spending start to materialise and cast a shadow over the local economies of those centres which are worst affected.

“We believe that the structure of the Government's proposed planning policy will cause considerable disruption to an already fragile planning environment and as a consequence we expect to see a fall in the number of planning applications being brought through the system. The political complexities of the new planning policy will create uncertainty and delay and will result in industry-wide frustrations. What is really needed is a system which divorces itself from politics and responds to the pragmatic issues of housing needs, unfortunately this sentiment does not seem to have prevailed.”

“Over the last six months we have seen some positive bidding from developers looking to re-enter the land market, however, in the majority of instances these parties have been unable to persuade their funders that their optimism for the market is fully supported by the prospect of rising prices.

“We believe the medium term prospects for the prime markets are good and that London will continue to benefit from the weakness of sterling. The international buyer has certainly played an important role in revitalising the market, albeit the majority of this growth has stemmed from the second hand or individual unit market. This said, we believe that those developers bringing property to the market over the next 12-18 months will potentially find themselves in a strong selling environment and on the assumption that they have delivered a quality product, both in terms of spatial design and finish, and price it based on realistic expectations, they will find success.

“Our message to land investors is that now is a good time to buy however we would caution against too much optimism within the base appraisal as the equity and debt markets will not be around to support aggressive assumptions.” 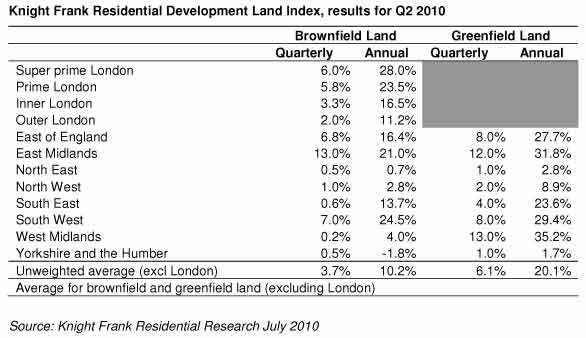