Building activity in South Africa’s residential property sector continued to contract on an annual basis up to April 2010, with the segment of houses larger than 80m² recording a slowing pace of contraction in levels of activity since the second half of 2009. The other two segments, i.e. houses smaller than 80m² and flats and townhouses, continued to show major contractions in activity up to April.

The construction phase of new housing, reflecting past trends in the planning phase, registered a massive decline of more than 40% y/y in the number of units completed in the three segments of the market in the period January to April this year. In April the volume of new housing units constructed was 45,9% y/y lower at 2 910 units from a total of 5 376 units completed in April 2009.Against the background of the trends in residential building activity in the first four months of 2010, the sector is forecast to continue to experience tough conditions in the short to medium term. The current tough conditions and the depressed outlook in respect of activity is reflected by a further decline in the FNB/BER composite building confidence index to 24 index points in the second quarter of the year from a level of 30 in the first quarter. The second quarter index value was the lowest on record since the first quarter of 2001, and well below the peak of 88,5 in the second quarter of 2007. 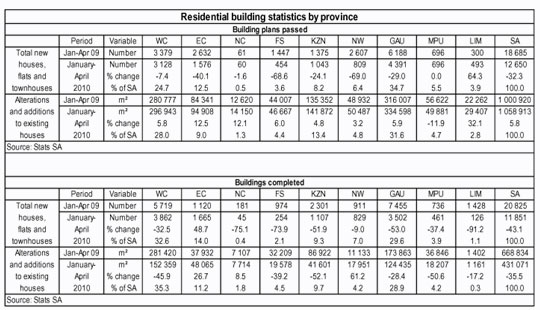 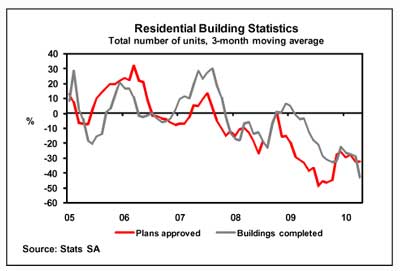