-         Prices in central London rose in May by 1.4%, the fourteenth consecutive monthly rise

-         Overseas buyers have grown in number, led by a 112% growth in Russian applicants in the last two months

Liam Bailey, head of residential research, Knight Frank, commented: "The London residential market is continuing to lead the wider UK market. The weak pound is having the effect of pulling in demand from overseas buyers, who view London as offering good value, with prices still 34% lower in dollar terms from the 2008 peak.

"Russian buyers have become very noticeable over the past two months and have bucked the trend set by domestic buyers who became less committed in the run up to the election. Russians and most other nationalities buying in London are fairly unaffected by political upheaval and have remained by far the most confident and proactive buyers in the market.

"There is no doubt that the current global financial market upheaval has unsettled buyers and sellers, the proposed CGT changes have also unsettled some sellers in particular, and there has been a sharp uplift in prospective vendors looking to test the market, our data reveals a growth of 64% in requests for pre-sale advice and valuations, however this is not yet turning into hard instructions to sell.

"There is growing evidence in the wider UK market that residential sales volumes and even prices are coming under pressure, London will not escape this entirely over the next few months however the impact of strong and resilient demand from overseas will support the market.”

Elena Norton, Head of Knight Frank’s Russia & CIS Desk, commented: “Buyers from Russia and the CIS states have increased their interest in London’s luxury market on the back of recent events in the Eurozone which has prompted the strengthening of the rouble against the pound. The ongoing recovery in prime London prices has also created additional interest in London as buyers now believe that the market is likely to continue to strengthen.

“I can see a clear shift in demand towards single house refurbishments and even larger development opportunities where Russians can be investors or co-developers. Increasingly they are looking to add value over the longer term, which proves that Russian buyers consider London property a safe and attractive investment.” 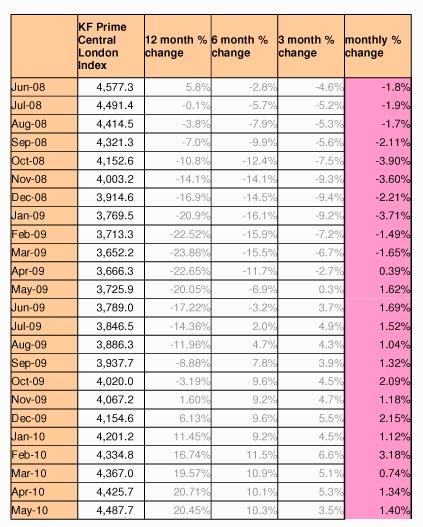 Prime London is taken to include all the above plus: Canary Wharf, Hampstead, Richmond, Wandsworth, Wapping and Wimbledon.