·         Demand in the market is dominated by residential developers and house builders, 44% of all buyers

“Residential development land values are rising on the back of improving demand (up 15% in terms of purchaser applications in Q1 2010 compared to Q4 2009) and a slow growth in supply volumes (up 8% in supply of sites for sale over the same period).

“House price growth has certainly helped, but it is the supply and demand dynamics in the land market which is really pushing prices higher across the country and especially in the south of England. While demand remains strong, it is constrained by the low availability of speculative development finance for projects over £10m. The availability of finance continues to improve but slowly.

“The lack of quality opportunities is still a drag on market activity. A good portion of current available supply is tarnished through either over exposure or over pricing. The housebuilders are in acquisition mode (44% of all purchasers), they are looking very hard at Greenfield locations where they are finding a wider range of attractive sites compared to six months ago. Greenfield land is still attracting a premium with the ease of construction and reduced margin for risk proving to be a key driver in bidding for land.

“Urban locations are still not being targeted outside of London. Where they are, it is as much by the RSLs, who are still a force in these markets, as it is the housebuilders.

“Developer strategies are divided across the UK, with deferred purchase still preferred route in the slower northern markets, but in the south there is a real need to get on with construction and builders are looking at opportunities where they can move on with developments rapidly.

“In London, and especially central London, the market is buoyant with much improved sentiment across the board. The land market has been lifted by the spectacular turn around in the capital’s housing market.

“There are some signs that the supply of land in London could rise steadily over the course of 2010, potentially pushing land values lower, there have been a few more distressed land sales and smaller site sales over recent months, as the market has improved. Developers have also become concerned over the strong level of house price growth which has continued into the second quarter of the year.

“There is an increasing expectation that the Bank's need to sell assets will grow during the year, and will lead to a widening of stock availability – there is still little early evidence of this scenario developing. Much will depend on the banks strategy for releasing sites to the market and also their ability to provide the development finance to accompany these land sales.

“Following the indecisive election result we have just experienced, the key key issues to watch in the short term will be the lack of grant availability from the HCA, which will become critical over the next three months. There is also likely to be a degree of turmoil in the strategic land market caused by proposals in the Conservative Party’s planning green paper and also the Liberal Democratic VAT policy for new homes. With political deals in the offing no-one can be certain which policy mix will ultimately prevail." 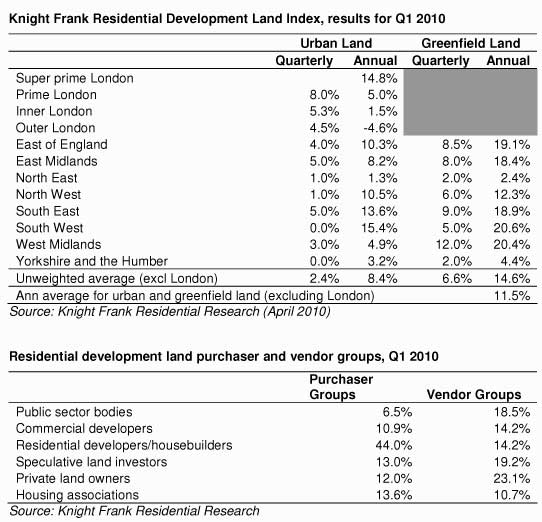