The upward trend in nominal house price growth, evident since the middle of 2009, continued up to January 2010, based on Absa’s calculations. In real terms, house prices continued to decline up to December last year, with the increase in CPI inflation to a level of 6,3% year-on-year (y/y) (5,8% y/y in November) influencing real price growth calculations. The uptick in inflation can mainly be ascribed to base effects as a result of low fuel prices in December 2008.

Prices in the category of small houses (80m²-140m²) were down by a nominal 0,2% y/y in January 2010 (-0,7% y/y in December after revision). This caused the average price of a small house to come to a level of about R670 100 in January. On a month-on-month basis prices increased by a nominal 0,2% in January. Prices in this category of housing dropped by a real 6,6% y/y in December last year, unchanged from November.

In the segment for medium-sized houses (141m²-220m²), the average nominal price increased for the first time in January this year since late 2008. However, the price rise came to a marginal 0,1% y/y (-1,1% y/y in December after revision). A price increase of 0,6% was recorded in January compared with December last year, causing the average nominal price in this segment of housing to come to a level of around R941 000. After adjustment for the effect of inflation, a real price decline of 6,9% was recorded in December 2009. 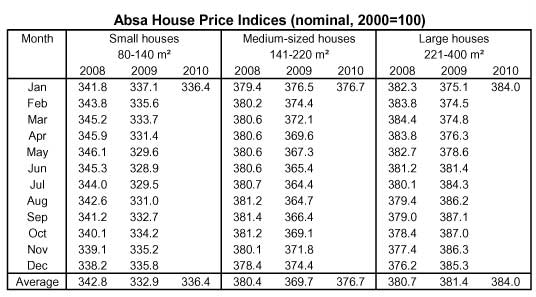 The South African economy emerged from recession in the second half of last year and is forecast to record real GDP growth of about 2,5% in 2010, mainly on the back of the global economic recovery and higher levels of domestic demand. CPI inflation accelerated to above 6% in December 2009, but is forecast to be within in the target range of 3%-6% in the second half of the year. With some upward pressure on inflation expected during the course of the year, interest rates are forecast to remain unchanged up to late this year before being hiked to control inflation.

Against the background of relatively high levels of debt, tight labour market conditions and pressure on disposable income, many households still experience a fair amount of financial strain. These conditions are only expected to improve in the second half of the year, while not much can be expected from the Budget later this month in terms of personal tax relief, as government revenue came under severe pressure on the back of the recession.

The gradual recovery in the residential property market is expected to gather further momentum in 2010 as a result of better economic conditions, the lagged effect of lower interest rates and less tight credit conditions. Keeping in mind that the positive effect of lower interest rates will gradually wear off towards the end of the year, nominal house price growth of around 6% in 2010 is currently projected. 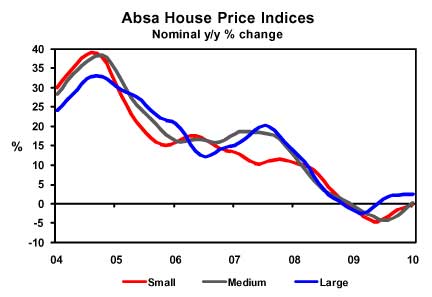 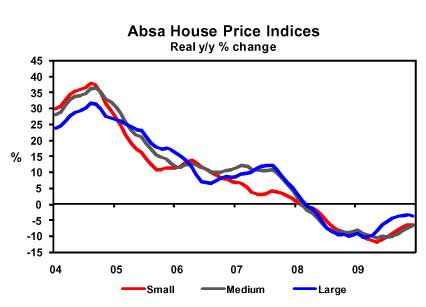