Following on last month’s Newsletter where we analysed the unemployment problem in SA, I wish to explore the topic further by looking at the role of the public sector in unemployment relief. There are some myths that we need to debunk. Every person is entitled to his own opinion, but not to his own facts. (Anyway, that is my opinion!)

Myth 1: The civil service has grown

In March 1995 the total number of civil servants came to 1 275 644. This included all national government departments, all nine provinces as well as some statutory bodies. It excluded municipalities, universities and parastatals, which ran their own payrolls.

In short, the civil service was smaller in 2009 than ten and fifteen years earlier.

From a common sense perspective, these numbers should not surprise us. A lot of white employees left the civil service after 1994, the ten Bantustan as well three Tri-cameral Parliament administrations were also rationalised.

So much for the myth that the civil service has grown since 1994.

Beyond the civil service: the public sector

If we add all the various spheres of the public sector in SA together, the number comes to around 1,5 million people. The details are as follows:

Add to this the country’s 23 universities, which are partly financed by the public purse, and one ends up with around 1,5 million people working in the public sector at large.

That equates to 11,7% of the 12,8 million people that were working in SA in Sept 2009. How does that compare internationally?

According to Public Sector Employment Statistics at the ILO (International Labour Organisation) – sadly the numbers are from 1998 (the survey was in the late 1990s when the transition from communism to market economies was at its high point). The percentages of total employees working in the public sector were as follows:

For 14 countries in transition to market economies = 40%

For the BRIC countries = China is the lowest, SA 2nd lowest, then Brazil, Russia and India.

SA at 11,7% is clearly towards the lower end of all the above ranges.

Myth 2: The EPWP will create jobs

The state has of course made a contribution through the various public works programmes it runs, officially known by the jargon of the EPWP (Expanded Public Works Programme).

To summarise what we stated in previous newsletters, in the five years from 2004 to 2009 a total of 1,65 million “job opportunities” were created by the public works programmes. These should not be confused with “normal jobs” as they pay a low wage and are temporary by nature.

Nevertheless, these jobs help with poverty relief, give people some hope, basic skills and involve them in building the country, all important benefits to our society. The Zuma Government aims to expand this programme dramatically and create 4,5 million job opportunities over the next five years to 2014.

The President’s ill-fated promise that 500 000 job opportunities will be created by the end of this year refers to job opportunities created under this programme. The latest numbers indicate that it will be a hard stretch to reach the 500 000 by the end of December. But if the final number is, say 400 000, does it really matter?

Nevertheless, these jobs are not jobs in the normal sense of the word. The government itself prefers to call them “job opportunities”. As such the EPWP is not the answer to the country’s unemployment problem.

During the 15 years to the end of 2008 the economy created 4,3 million jobs, an increase of about 44%. Yet, as we saw above, during that time the civil service shrank by about 10%.

It is thus clear that the public sector on a national, provincial and statutory body level has not made a contribution to job creation.

The fact is, all the job growth that we experienced in SA since 1994 came from the private sector. (As were the one million jobs lost in 2009.)

Over the last three years the civil service has begun to expand again. There was growth of 93 000 jobs (of which it seems about half were police officers, which grew by more than 50% and is set to grow further in coming years). However, the 93 000 is less than 1% of the total employment number in SA.

The simple truth is that the private sector is the important player when it comes to job creation. When growth returns to the private sector, growth in jobs will also return after a necessary delay of 6 months or so. As the last newsletter concluded, it is all about economic growth. Let us lift a glass to that in 2010 and beyond. 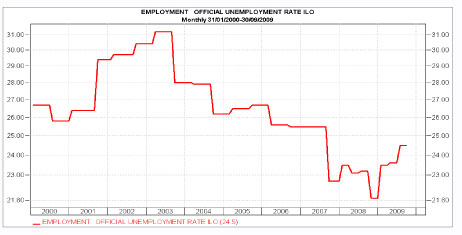