Levels of activity in the residential building sector remained depressed up to August 2009. Both the planning and construction phases in respect of new housing continued to suffer in the first eight months of the year, driven by economic conditions, which negatively affected the supply of and demand for new housing.

The real value of plans approved for new residential buildings amounted to R11,19 billion in the period January to August 2009, which was 46,5% down on the R20,92 billion approved in the first eight months of 2008. The real value regarding residential buildings completed, dropped by 25,2% year-on-year (y/y) to R11,79 billion in January to August this year, from R15,77 billion in the same period last year. All real values are calculated at constant 2005 prices.

The number of residential building plans approved was significantly lower in all three segments of housing in the first eight months of the year in comparison with the corresponding period last year (see table below). These trends will negatively affect the construction phase over the next 12 to 18 months. The number of new housing units for which plans were approved was down by 28,2% y/y to 4 467 in August 2009, from 6 218 units in August last year.

The total number of new housing units completed was almost 18% y/y lower in January to August 2009, driven by the segments for houses larger than 80 m² and flats and townhouses. The number of houses less than 80 m² was up by 4% y/y in the first eight months of the year, supporting the demand for housing at the lower end of the market. However, a markedly smaller number of lower-cost units for which plans were approved so far this year, does not bode well for the future construction of and thus the demand for affordable housing. In August the number of housing units constructed was down by 39,6% y/y to 3 843 units, from 6 362 units a year ago.

With an economy that is in recession, impacting employment and household income, the housing market continues to experience a fair amount of strain. Based on the current demand and supply conditions in respect of housing, residential building activity is forecast to remain under pressure towards the end of the year and into next year. There are, however, indications that the economy is on the path to recovery, supported by lower interest rates, while property market conditions are changing for the better. These developments will eventually work through to higher levels of activity in the residential building and construction sector during the course of 2010. 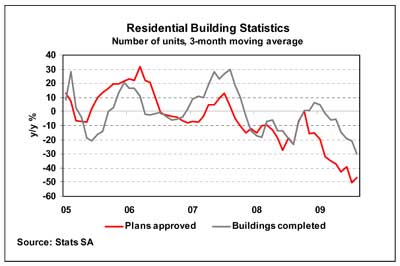 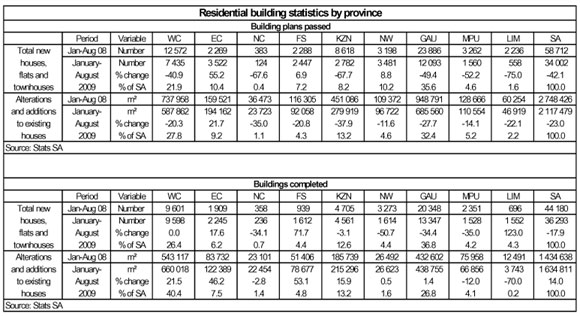