The South African Reserve Bank’s Monetary Policy Committee cut the key monetary policy interest rate – the repo rate – further, by 50 basis points to 7,0%. In reaction to this, Absa announced that its lending rates to the public, i.e. prime and mortgage rates, will be cut by the same magnitude to a level of 10,5%, effective from 14 August 2009.

Interest rates have been cut by a cumulative 500 basis points since December 2008, with prime and mortgage rates now back at their mid-2006 levels before rates were hiked as a result of rising inflation.

Mortgage repayments will now be 26,3% lower compared with late last year, based on the interest rate cuts since December, when the mortgage rate was at a level of 15,5%. The lower interest rates are providing some further relief to a still heavily indebted household sector, while improving the affordability of housing. Total household debt as a percentage of disposable income was at 76,7% in the first quarter of 2009, while outstanding household mortgage debt was just below 50% of disposable income in the quarter.

The South African economy is currently in recession after contracting in both the fourth quarter of last year and the first quarter of this year, with expectations of a further contraction to have occurred in the second quarter. Despite the declining trend in interest rates since late 2008, real gross domestic product (GDP) is forecast to contract by around 2% for the full year, after growing by 3,1% in 2008. The economy was last in recession back in 1992, when real GDP dropped by 2,1%.

House prices declined by a nominal 4,2% y/y in July 2009, according to Absa’s calculations. In real terms, prices dropped by 10,3% y/y in June. As a result, average nominal house prices are back to levels last seen in the second quarter of 2007, while in real terms, prices are at their lowest level since mid-2005. Nominal house price deflation is set to continue for the rest of 2009, but the pace of deflation is forecast to slow down towards the end of the year. House prices are projected to decline in real terms for a second consecutive year in 2009. 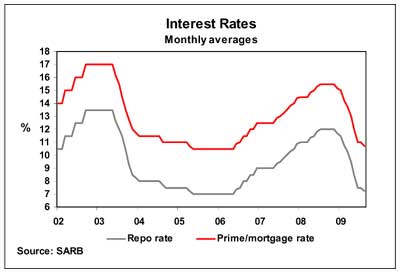 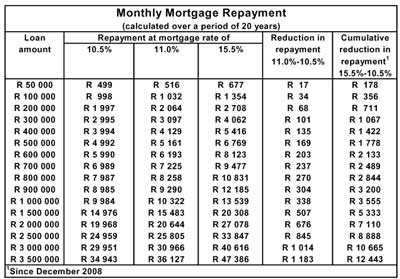