June 2009 saw a continuation of the declining trend in both nominal and real house prices in the South African housing market. 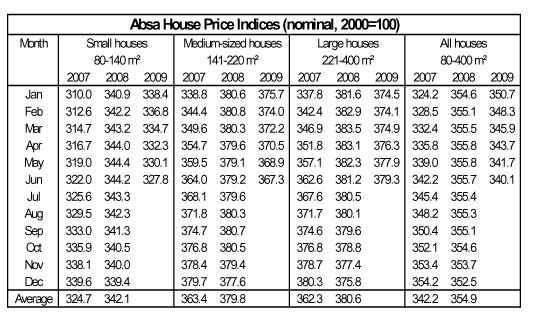 The South African economy is firmly in a recession after contracting by a real annualised rate of 6,4% in the first quarter of the year and 1,8% in the final quarter of 2008. Sharp declines were recorded in the real value added in especially the mining and manufacturing sectors in the first quarter, while job losses occur over a wide front in the economy. The economy is forecast to contract by 1,9% for the full year, after growing by a real 3,1% in 2008. It will be the first recession in the South African economy since 1992, when real gross domestic product dropped by 2,1%.

On the back of a nominal 2,9% decline in house prices in the first half of 2009 compared with the same period last year, the average price of houses in the middle segment of the market is back to levels last seen in mid-2007, while in real terms, prices are at their lowest level since mid-2005.

Nominal house price deflation is set to continue for the rest of 2009, starting to slow down towards the end of the year. House prices are forecast to decline by about 3,5% in nominal terms this year after growing by 3,7% in 2008. In real terms prices are set to drop by more than 12,0% this year, taking into account projections for consumer price inflation. This will be the second consecutive year of lower real prices.

The lagged effect of lower interest rates and a gradual recovery in the economy from the second half of the year are factors which will contribute to an expected improvement in residential property market conditions from early 2010. 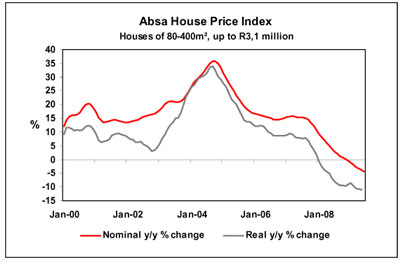