Data on residential building activity released by Statistics South Africa up to April 2009 indicate that the planning and construction phases of the housing sector remain depressed against the background of tough economic conditions.

In the four months up to April this year, residential building plans with a total real value of R5,44 billion were approved by local government institutions, which was 51,9% lower compared with R11,31 billion in the period January-April 2008. The real value of residential buildings reported as completed in the first four months of 2009 was 18,6% lower at R6,23 billion compared with R7,66 billion in same period last year. All real values are calculated at constant 2005 prices.

The number of residential building plans approved for houses smaller than 80 m² was up by a marginal 0,5% year-on-year (y/y) to 8 385 units in January-April this year. In the segments of houses larger than 80 m² and higher-density housing such as flats and townhouses, major declines were recorded in the number of plans approved on a year-on-year basis in the first four months of the year (see table below). The number of new housing units for which plans were approved was down by 45,9% y/y to 3 717 in April 2009 compared with a number of 6 867 units in April 2008 and 4 151 units in March this year. The April 2009 volumes were the lowest since December 2001.

These trends are an indication of the extent to which the market for new housing has slowed down on the back of economic conditions impacting the household sector and the demand for new housing.

In view of an economy that is in recession, and the impact of this on employment and household income, the expectation is that residential building activity will remain under pressure in the rest of the year. 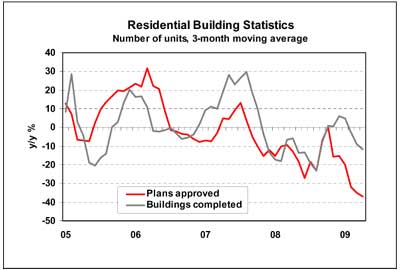 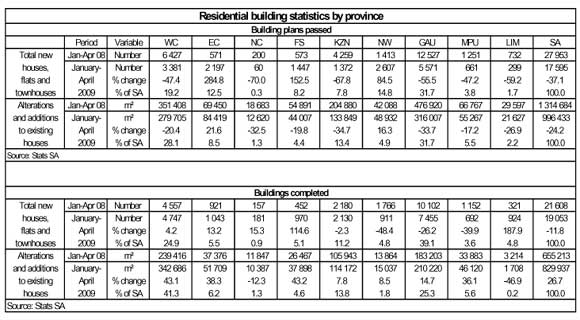