Last week it was announced that the Reserve Bank’s Monetary Policy Committee (MPC) will meet once every month in the rest of 2009, except in July. Today, after a two-day meeting, the key monetary policy interest rate – the repo rate – was cut by 100 basis points to 9,5%. In reaction to this, commercial banks lowered their lending rates to the public, i.e. prime and mortgage rates, by 100 basis points to a level of 13,0%. Interest rates have been cut by a cumulative 250 basis points since December 2008.

The latest developments and future prospects with regard to inflation, as well as global and domestic economic conditions are seen as the main reasons for the further lowering of interest rates.

CPI inflation slowed down to 8,1% year-on-year (y/y) in January this year, and is expected to taper off further in coming months, although recent food and petrol price movements may add to some inflationary pressures in the short term.

Global economic conditions have deteriorated further, with the International Monetary Fund (IMF) now expecting a contraction in the world economy of between 0,5% and 1% in 2009, which will be the first time in 60 years. Output in the US, Euro area and Japan is forecast to fall by 2,6%, 3,2% and 5,8% respectively this year, while emerging and developing countries may grow by between 1,5% and 2,5% this year.

The South African economy has slowed down sharply up to the end of last year, with the manufacturing and wholesale and retail trade sectors experiencing recessionary conditions. With virtually no economic growth projected for 2009, the issue of job losses has become more pronounced in various sectors and are expected to increase further during the course of the year, negatively affecting household income. These developments and expectations are adversely influencing consumer and investor sentiment and levels of confidence in the economy.

On the front of the residential property market, conditions have deteriorated markedly since late 2007, with the sector expected to remain under pressure until late this year, despite declining interest rates. This view is based on the abovementioned expected economic and employment trends, as well as housing demand and supply conditions and lending criteria still remaining tight. Although interest rates were cut by a cumulative 250 basis since December, causing mortgage repayments to have dropped by 13,4%, they are still 17,4% higher than in June 2006 when the mortgage rate was 10,5%.

Against this background, the housing market continued to slow down in recent times, with prices declining by 1,3% y/y in nominal terms in February this year, while in real terms, prices were down by 8,3% y/y in January.

The residential property market is forecast to bottom towards the end of 2009 and to gradually recover during next year on the back of lower interest rates and improved economic conditions. House prices are forecast to decline by a nominal 3%-4% and a real 8%-8,5% in 2009. 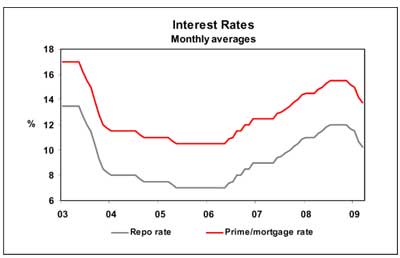 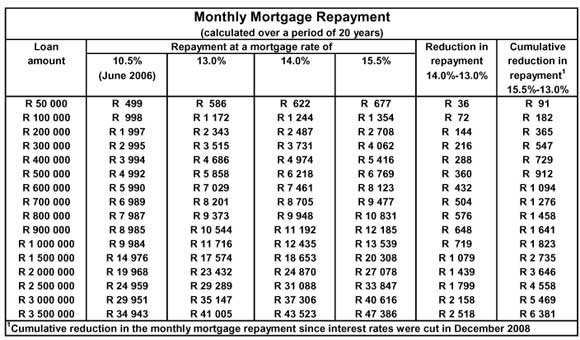 Disclaimer: The information in this publication is derived from sources which are regarded as accurate and reliable, is of a general nature only, does not constitute advice and may not be applicable to all circumstances. Detailed advice should be obtained in individual cases. No responsibility for any error, omission or loss sustained by any person acting or refraining from acting as a result of this publication is accepted by Absa Group Limited and/or the authors of the material.